Titanic at the Minack Theatre 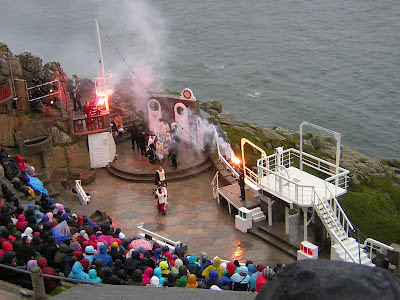 Last week I achieved a lifetime's ambition and finally saw a full-scale production at the Minack Theatre.

The Minack is that most English of things which rooted and blossomed in the magical kingdom of Cornwall; a private obsession which chimed with others and called them to itself. Miss Rowena Cade, an amateur producer, offered the use of her garden to the local players for a production of The Tempest. They had done well with A Midsummer Night's dream in a nearby meadow.  The garden of Minack House, however, did not readily offer somewhere to seat the audience.  Cade looked in to what was then a gully above a rock used by fishermen and wondered if a stage could be built down there, where the sides suggested a natural amphitheatre.   Where better to place Prospero's island but on a rock jutting out over the Atlantic Ocean?

Miss Cade and her gardener set about sculpting the theatre and in 1932 The Tempest was performed - by moonlight.  The Times noted the event and a dream became flesh.

That dream was nearly wrecked by WWII, but Cade, who had by now lived through two wars, set about re-building the theatre. She did not know the meaning of  "Give up" but the phrase "The Show Must Go On" was written on her heart and, in most cases, her own wallet.

The theatre is open air - although Cade had some ideas late on for adding bad- weather covers - and that means that you take your chances. All tickets come with a warning to wear suitable clothes and that umbrellas are not to be put up in the auditorium as it intereferes with the view.  In extreme weather they might cancel but normal rain is ignored.

On Monday 9 April the pleasant Cornish spring weather scuttled off to be replaced with bluster and sudden showers of extra-wet rain.  Stopping to pick up a picnic, the lady in the bakery said her friend was a producer and he had called her to say the Minack was experiencing winds sweeping the drizzle down on to the upper terraces, where by coincidence I had a seat to see "Titanic - the musical".   I bobbed over to the sailing shop and explained the situation to the lady behind the counter. She sold me a showeproof suit  and a Frosty Fox snood in a piratical stripe to keep my hair out of my eyes.

Sitting on a rolled-up mat on the terrace, in my survival suit and wrapped up in a waterproof-blanket, I settled down to watch the matinee performance of a lifetime and got it buckets.

The musical has been performed frequently around the world since its slow start in 1997.  This production was by the local Atlantic Theatre Company.  Using an amateur cast emphasises the ordinary lives of many who died rather than the extraordinary lives of  passengers such as the campaigning editor and journalist W T Stead, who perished on the night he might have written his greatest scoop.

An ingenious stripped-down set had been developed to create the bridge of the doomed ship and to focus on the poignant performances.  History records that the night of the disaster was unusually calm; the water was oily flat as the air, although freezing, was static.

The Atlantic was not having this.  This was its big chance to be seen in daylight instead of gleaming in the velvet darkness, and it wanted to be in the performance so it gathered itself in to swollen rollers and flung spray up over the Minack rock below the stage.  The wind hummed loudly over the orchestra,  tugging at our hoods and bringing us a taste of salt.

At the interval the rain started, through which gulls plunged in to the waves, fishing as the incoming tide brought a shoal close to the Minack rock and within reach.   The gulls circle lazily until they see where dinner is, then fold their wings and dive in to the water with a tiny ring of white to mark where they vanish, clean as an arrow.

In the second half the weather threw itself at the performers who continued, cold, soaking wet,  the wind plastering their clothes to their bodies.  This was not historically accurate but it conveyed a sense of impending shipwreck; the sea and the sky produced spectacular special effects but at the cost to the cast of them being only a little warmer than they would have been had they been dunked in the sea that fateful night.

It has been dismissed as grief-porn, this picking over of a century-old civil disaster but that is to miss what even Goebbels - who later commissioned a film about it - realized. The disaster was capable of being read several ways and has been over the century. Jared Poley tells us that in 1912 the dominant theme was that of nature triumphing over man but by the 1940s Goebbels used it to amplify what was true; much British self-confidence had gone down with the ship.
Posted by Woman on a Raft at 12:52 am

Nice article, thanks for sharing.

"the magical kingdom of Cornwall"

Well, I hate the theatre these days, but you're right about Cornwall.

You must be terribly unlucky with the productions you are visiting Mr Fowke; I spent an evening with the spiritualist Ogden Sisters in the Burrell Theatre and was transported back to 1892, then went to Hall for Cornwall and saw the Globe Theatre Company in the touring production of Anne Boleyn.

Down in Torquay The Jolly Lion listed at least seven productions opening nearby; surely there must be something which appeals?

Stay away from the West End, that's my advice. I've only seen one clunker this season and even that was beautifully produced and acted - it was just that the story left much to be desired.

The Minack is splendid, and having camped em famille nearby for many years, we saw many productions there; all fun, and some of them excellent - and even if not, the view is so spectacular it alone is worth the price of entrance.

True. I don't know if you've been there recently Mr Elby but there is a smashing cafe which has panoramic views, although they are perfectly happy for you to bring a picnic.

On story telling days they throw in free entertainment with the admission and, of course, you can go down on to the stage if you like when it isn't being acted on.

The good thing is that over the last decade the Trust which runs the theatre has expanded the tourism and marketing which keeps the ticket prices low (I think I paid about £9) and the theatre is solvent.

It's amazing how many people visit the place just to see the improbable building; the live webcam shows visitors all the time.

I have never been to the Minack (and, today, my physical limitations would make it impossible) but I have actor friends who have performed there regularly over several seasons and love it whilst finding it a challenge – all those steps and the perils of the weather. I once watched (silent) their production of 'Pygmalion' via the theatre's web-cam!

Anyway, thanks for an evocative report on your visit and the show with some pertinent observations on the current Titanic-fest. I am glad that quite a lot of the centenary coverage has focused on the real lives rather than the fictional folk who sailed with James Cameron's ship or the lost souls in 'Drownton'. With so many real stories, it is perverse to invent. No wonder so many youngsters (until recently) were unaware that Titanic was a REAL ship!

Glad you enjoyed it Brian.

Obviously I don't know the limitations which apply, but there has been considerable work on the upper terraces in the last decade now that the Trust has got a firm grip on the finances . Yes, there are shallow steps but they have stewards who are happy to help.

There were many ladies in their late 80s or early 90s in the audience. They just leave extra time for getting settled and being helped back up the hill.

You've missed your chance to get tickets for the Port Isaac fishermen, though. This unlikely bloke-band has sold out again.

BTW, if you haven't seen it, the website for the Telegraph Museum next door is a lulu. They have arranged for PhD researchers to look for stories in the archives and some fascinating things about the history of communication are emerging. The Blue Train which carried a mobile communications hub is just begging for a historical drama setting.

Benjamin Oldcorn had the foresight to pick a PhD which requires him to live at Falmouth and poke about in the archives at the Museum in Porthcurno. Some people have got the right idea.

Although I have never visited the Minack I recall seeing it featured on the telly antiques show Flog It.

The picture illustrating your piece shows exactly what it is as a theatre - a small and quirky venue. So are a great many little theatres around the country.

What I found extraordinary in the piece on Flog It was that the physical creation of the structure was the work of an elderly-ish lady and a chum. A new row of seats was needed, she decided where it should be and between them they dug the ground and set the stones until it was done.

The theatre is a marvellous example of what happens when people with, ostensibly crazy, ideas just get on with it. Maybe it succeeds, maybe it proves to be so crazy that it falls on its expensive behind. But it doesn't cost Mr & Mrs Ordinary a penny in tax.

Ahoy there FTB, hope your spring planting is going well.

Yes, there are many gem theatres in Britain - such as my favourite Theatre Royal Bury St Edmunds - but not one of them has a water feature like the Minack.

Haven't been to a play there for some years, tho' most years I camp at Treen camp site, just down as it were, from Porthcurno. Friends of mine who hippied down there in the 70s do the garden at the Minack - and yes, the cafe is excellent.

My Mum's folk are from down that way - her grandfather was a blacksmith at a tin mine Camborne way (and via this side, I am related to John Cleese - his grandmother's sister my great-grandmother!) and I don't feel right if I don't get there once a year. Many happy times camping there with the kids when they were young.