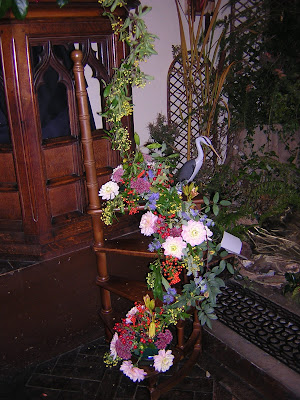 The pulse of an older England has been beating all summer through fairs, exhibitions, holidays. It's now the end of Summerland and the distant trumpet of winter comes early in the morning on the mist. 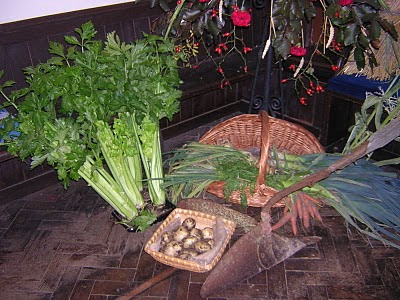 The finale of the Harvest Festival overlays Christian theology on the underlying pagan year marker of the Autumn Equinox where, if you've been lucky and diligent, there will be enough food in store to keep you alive for the next six months. 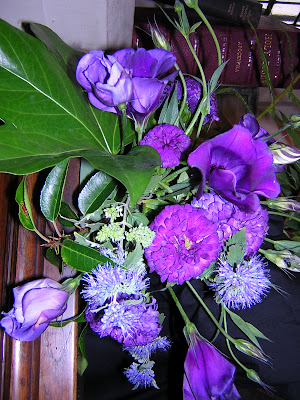 This is the time of year pensioners put an extra tin of ham in the back of the cupboard. They couldn't tell you why since they prefer to live on tea and biscuits and the tins are a sod to open, but that daft peardrop makes them feel safe, like a huge lucky charm. 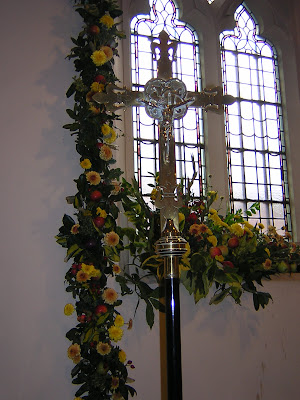 The Harvest Festival is enjoyed particularly by the ladies of the parish. They take over the church and build tableaux of of fragile beauty out of materials they know are mortal.

So does their Lord.

Now Muriel plays piano
Every Friday at the Hollywood
And they brought me down
To see her
And they asked me if I would --
Do a little number
And I sang with all my might
And she said --
"Tell me are you a Christian child?"
And I said
"Ma'am I am tonight"


Ana Free's version because it is the one which would be performed in a church. 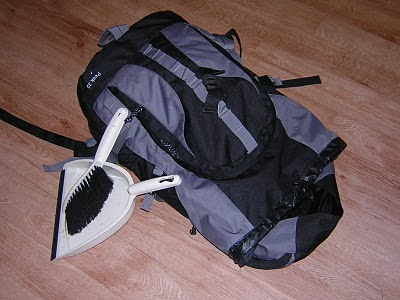 Terrorism is such hard work. It takes all your money and time and limits the opportunities for a social life whilst simultaneously demanding that you maintain a semblance of normality. Effectively, you have to subsidize the terrorism by holding down a day job. Unlike being a British sports person - Olympic pole-vaulter by day, pole dancer by night - you don't even stand a chance of being invited to open a supermarket and be paid in tinned goods.

It's not much of a career structure, especially in the suicide divisions. In general, the pay sucks. If you look over the century very few have come out of it well. Mandela had to wait 25 years in sub-standard accommodation and gamble on living long enough to collect his retirement bungalow. So what if you end up squatting on a golden commode or having council estates in Peckham named after you? On a personal level, it's not much of a swap for the finite years of youth. Naomi Campbell is swooning over Nelson? Yeah, right. Maybe sixty years ago.

That's if you make it at all. Due to the lack of formal professional qualifications in terrorism and the absence of career structure and contracts, the life of a terrorist could be summed up as "You take a risk for highly uncertain outcomes and nobody ever guarantees to pay you". It is like rock'n'roll in that respect; the big payouts go to a handful of successful performers and the rest of the industry is awash with wannabes who are either culled by time or whose talents are appropriated to shore up the careers of the major artists.

Unlike rock'n'roll, there isn't a constant popular demand for new bogeymen; we manage with half a dozen established brands. This has cleverly been franchised by Al Qaida, whose lead singer hasn't been seen in the flesh recently. Like Elvis, he may be enjoying a posthumous recording career.

In the case of the IRA there have been a couple of winners but for most members the best they can hope for is a decent funeral cortege. The West Ham supporters do as much for each other. Go to Hornchurch crematorium any day of the week and you'll find they are there in dark coats and threateningly neat haircuts, companionably shouldering the coffins of terrace brothers whom they may or may not have known, taking little more than a sausage roll for their trouble if they are invited to the do afterwards. The advantage of spending that time at West Ham being that occasionally Hammers will win, you don't have to keep your hobby a secret (much) and there is no penalty for leaving the club. You don't have to spend the rest of your life looking nervously over your shoulder.

That is a disbenefit which is rarely mentioned when joining up with a terrorist organization. What happens if you want to leave? Dunno - most people don't live long enough for it to become an issue.

Another thing they won't mention is the disciplinary procedure. The modern terrorist organization almost certainly has investigatory panels although they are lighter on the written records than a conventional employer and may have unorthodox fact-finding techniques. Their disciplinary penalties don't use fines, because you haven't got any money, and they don't use loss of pension rights because...see 'leaving the organization' above. All that remains is getting medieval on your ass. Nothing is known of the appeals procedure. Do let me know if you hear of one other than "roll screaming and begging on the floor".

Turning to the skills of the modern terrorist, they expect rather more than they used to. Speaking several languages on top of a science degree is the norm. When they say science they mean real ones: physics, maybe chemistry, computing, very applied maths or at a pinch, biology, is what they have in mind. If you have those qualifications, why would you want to put them at the disposal of somebody who has not the slightest intention of reimbursing your expenses?

If you haven't got those qualifications - let's be realistic, British state education has reduced the chances anyone doing those subjects, which is why universities are closing their physics and chemistry faculties - then make your mind up to the fact that you are going to be the one hoofing round the hairdressing supplies warehouses and the garden centres with the dodgy shopping list, and you'll be paying for it. When you get back to the cell, it's your turn to make the tea - again. You'll wait for a period approaching infinity before the theoretical physicists do it. All that waffle about brothers and equality always collapses in the face of housekeeping duties. And why don't they clean up after themselves? It is always the same old excuse "We aren't planning on being around for long".

So let's just summarize the job so far
1) Dirty
2) Dangerous
3) You get treated like the contents of the hoover bag because you are the junior
4) You don't get paid
5) You have to do all the cleaning up.

Plus, if your aim is terrorism against the West then remember the wisdom of Sun Tzu:
6) When your enemy is destroying itself, get out of the way.

Strictly speaking (6) is a concern for the management rather than the new entrant, but you should take it in to account. There you are scooting about in all weathers with a notebook, having taken a cover-job as a pizza delivery rider, misdirecting pizzas back to your homies who do nothing but complain about the sausage topping, and it should become obvious to you that anybody who is willing to pay over £17 for cheese on toast which is indistinguishable from the box, when you can make three large pizzas for under six quid, is a member of a society which is going to crash soon and in a bloody mess.

Labels: job of the month

Planet of the Apes

Outsider for the Labour leadership is Andy Burnham.

Diane Abbott did not imagine she would face a challenge from either of the Miliband brothers when she showed them how to use the tube system.

We finally, really, did it.

GOD DAMN YOU ALL TO HELL!