A fracas has broken out over pictures of football strip which got out ahead of the PR gig, and the story is now running in the Daily Mail and on regional television. A fan found pictures of the new strip on an authorized website and re-tweeted them, 12 hours ahead of the official  launch.  The club noticed and was annoyed.  It called the police.

I can understand that the PR wallah who was arranging the jamboree was miffed at having their thunder stolen just before they hawked their wares, but what I can't understand is why the police thought that they had to involve themselves in a civil matter by trying to classify this as within the scope of the Computer Misuse Act 1990.

The essence of our computing legislation is that, like much modern legislation, it is drawn widely because it is impossible to predict the situations in which it might be needed. The onus is on the police and then the CPS to not use it unless they've got a case which is in the public interest.

The wording was deliberately vague; the security services pushed for the Act in 1990 following the quashing of the Gold and Schifreen conviction, so that unauthorized access would be criminalized rather than the method for gaining that access.

The difficulty with this kind of 'no arguments sonny' legislation, though, is the unwritten deal that the state won't use it to get involved in private matters, to settle private or commercial scores or apply it trivially. We don't have a written constitution. Maybe it can't be adequately expressed in writing, but that's the deal and any reasonable grown up understands it. The difficulty is knowing when to refuse to become embroiled because it is just too trivial to be a criminal matter.

Why exactly did the police rush round to a fan's house? This was obviously a case where one is sympathetic then goes to talk to the lawyer before getting involved.   Possibly there was a matter of copyright infringement, but that's a civil matter, not for the police.

The allegation of a hack doesn't appear to have any substance; Norwich FC themselves put the pictures up via the intermediary promoter Emmerson Marketing, who didn't lock the pictures off properly and were amazed when the fanboi found them by looking at their HTML code and seeing the links there, although they were not yet revealed (reports El Reg in the comments).  Whoops.

As for any commercial implications; there aren't any. Norwich got some free advertising for a garment which nobody but its own fanbase cares about.  All the commercial damage came from the police trying to put the frighteners on a customer.

This was a case which was very low priority, and yet the police reacted because the h-word was waved around. Because they are police and not marketing managers it didn't occur to them that if you are planning the launch of a new home strip, in fact quite a lot of people have to know about it - particularly the sponsors, Aviva, who will have approval of everything, the t-shirt printers, the photographers, players and video artists making the promotional material, and the people building the marketing website who need the pictures ready to go.   The idea that a strip is 'secret' is charming nonsense,  a fairy-story which was told to the police, taking advantage of their relative ignorance.

Shirts don't happen by magic. They happen by contract - and contracts are not, in the first instance, a matter for the police.

Let's have a look at the time-line.

April 17 The fan posts pictures on Twitter
April 18 Norwich FC call the fan at 4.30am, then the police.
April 18 The police interview the fan
April 18 PR releases run by interested websites and papers - see below.
April 19 Daily Mail runs the story about the police interview.
April 19 Norwich FC official launch at Carrow  Road, which shows strip with a different style collar and new yellow streak on the shorts

The police seem unaware that Norwich gave the full story and a picture of their director, famous Twitterist Stephen Fry, posing with the shirt on April 18 to the insurance industry website Insurance Times and other websites such as strip suppliers. In order to set that exposure up, they may have given the material to websites on the 17th, who then package it for release on the 18th.

All that happened was a fanboi broke an embargo which didn't apply to him anyway. 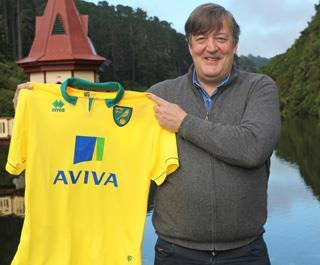 Norwich City director Stephen Fry said: “We’re so thrilled Aviva are with us for another four years. A four years which we hope will see our beloved club consolidate its natural home in the Premier League. “The new kit fitted me like a…football shirt. I was so pleased to be able to launch it, even while 12,000 miles away. You’d be amazed how many Norwich fans there are in New Zealand.”

As Fry explains he is in New Zealand and posing with the shirt, we can safely assume they've been in production for some time, other wise he wouldn't have one and they wouldn't be available to go fresh on the shelves, would they?  This is not 'secret' - it's just that some advertising material was pointed  out to the target market a few hours before the pr launch was scheduled. It's no more than a sneak preview of a product, the soul of gossip.  Nothing whatever to do with the police, who misdirected themselves as to the nature of this complaint.  It's only a 'surprise', the way a new car or a birthday present is a surprise. Fanboi rudely spoilt the "surprise", which is hardly surprising because that's what fans do - they talk about the club.  Clubs generally encourage this because without fans they are nothing.

The Club initially tried to defend its stupidity, then realized it had got it wrong and embarrassed the sponsor, Aviva, who sponsors them to butter-up the customers, not antagonize them .  The very last thing you should do for someone who just paid you a pile of dosh to be associated with a global brand, is draw attention to a minor stuff-up at a PR launch. Norwich FC made their own patron saint Delia look like a cheap thug.  Given Fry's media sophistication and his own enthusiastic use of Twitter, it is most unlikely that he would have run screaming to the rozzers.

Someone with clout at the club called the police - was it CEO David McNally? He would have had to be asked first.  Then somebody with clout in the police responded by sending a constable when they should have insisted on taking legal advice first .  Any lawyer worth their salt would have pointed out that a twelve-hour spoiler was not the end of the world and that the first thing to check - politely -  was how the leak happened. It's not necessarily a criminal matter at all.

The question is why did the police act so swiftly?  Was it an example of funny handshakes, the hospitality box and putting the apparatus of a police state at the disposal of a bezzie mate?

That the police mistakenly thought this might be a hack is just about credible.  However, since it took five minutes to explain that the club's promoter had left live links laying around, the correct response is "Sorry to have troubled you Sir, thank you for being so cooperative".  And then tell David McNally that they are satisfied there was no criminal offence and that they wouldn't be taking it any further.

Instead, Norfolk police have ham-fistedly continued to suggest that there might have been an offence if malice had been present, with the poor fanboi being marched around to say sorry as if he could be guilty of something criminal.  This was not a criminal offence at all.  If it was anything, it was for the civil lawyers and not the police.

Norfolk Constabulary are very bad at these matters. They have just spent months being suckered in to the Climate Change debacle, where people mashing up data to suit their agenda have used - or wasted - police time in trying to control and shut down academic dissent.

Greetings.
Don't know what all the fuss is about. Most Cub's away kit is a Stanley knife and a baseball bat. Can you copyright that ?

I'll never understand why people answer their doors unless they're expecting someone.

From the Daily Mail: "The club even called Mr Brown at 4.30am yesterday to ask him how he obtained the images." [my emphasis]

I'd say there was malice present:
- a 4.30am phone call;
- setting the police on a fan for accessing data they put on the web.

Out of the three parties involved the only one who has apologised is the one to whom the other two actually owe apologies.

it confirms that police are there to look after corporations not the public.
nige.

Funny hand shakes and funny pinnys involved here, for sure.

And we should worry about cuts to the frontline because then there'll be no-one to catch burglars and rapists?

Hello Tadge. The Norwich away strip is a picnic basket; the fans wave Delia's pasties at the opposing team in a taunting fashion.

@ David
None of the stories say exactly when the police attended, but I'm betting they were on the case early in the day, so perhaps the lad thought it was the postie.

As Cranmer and others report, the Norfolk police had enough sense to keep out of a theological dispute that week.

@Derek P
I couldn't agree more. Disgraceful all the way round. I'd have told them what to do with their club and their shirts. Maybe the lad should take legal advice of his own as to whether the club's behaviour amounts to harassment. 4am phone calls and vexatious complaints to the police amount to a course of action for the purposes of that offence.

It looks horribly suspicious coming in a week when UEA has sent a suck-ass letter of congratulation to the Chief Constable about the reduction in the crime rate. It isn't clear who complained to the police about the church leaflet, but the Muslim Chaplain of UEA is busy giving interviews.

Gosh, I don't think there is any crime at all in Norfolk going by the letter sent by UEA, so the front line police are due to be rationalized in to a crack team of secular theologians capable of rooting out climate change denialists, pedlars of impenetrable leaflets, t-shirt heretics (I've still got my Bollocks to Blair t-shirt) and football strip spoilers.

It will be a socialist paradise if it isn't already.

Good grief. I would never have 'thunk' it, to borrow a plod expression.

Indeed, MTG. Interesting that although an officer was dispatched and told that an accusation of hacking was being made - so really they had no choice about going, so long as Norwich FC were telling the truth and did not know how the pictures got out - they had enough sense to not wade in with an arrest or even a confiscation of equipment.

The officer probably meant well when they went in to 'let's kiss and make up' mode, but having ascertained that no criminal act had taken place, they should have just gone home, or perhaps started asking what Norwich FC were told at 4.30am and if they already knew the spoiler was their fault. If they did, then to claim that it was a hack was malicious and a deliberate lie to the police.