Every google tells a story Google says I'm not the first person to wonder if Pippa is spoken for. From the automatically offered search terms it looks like Harry and six million others may have already enquired: 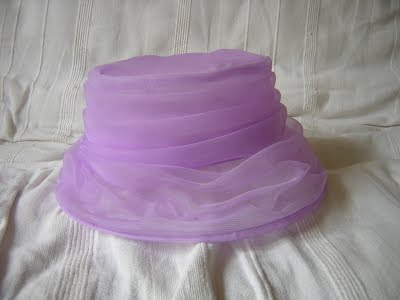 Nana Raft loves a wedding, especially a Royal one. She has spoken and thus it is decreed we will be hanging out the flags because, if you look round at the Family Windsor, this could be the last big Royal wedding for a long time. There is the Diamond Jubilee next year.

Baba Raft has kindly agreed to do the catering, so it's all round to her gaff for the nuptials. She puts on a magnificent spread does Baba, which is far better than leaving it to me.

With all due respect to Republicans, I do not share their reservations. The English dearly love a lord and so, as it happens, do the Poles. The Polish car wash has decked itself out in flags and, touchingly, the English flag, bless them, for it is our Saint's parade on Sunday.

If the Poles can put on a show, so can I.

Besides, it is a chance to wear a wedding hat I bought some time ago. The hat is super-light, whipped up out of netting, just the thing for watching telly in (New Look, dahlink). It is unfortunately similar to a lavender lampshade but it was a bargain. I've even got a heather-pink tweed jacket and dress which will go well with it.

Possibly I shall have to wear it with pink Crocs if there is a lot of trotting from the nibbles to the telly; it's important to get the right functional footwear for these formal occasions. I will also get out the diamante necklace, although diamonds are not really 'before lunch' jewels. But then, they aren't diamonds. Maybe I'll go with the Majorica pearls - they are much more Kate than Di.

Best Wishes to William and Catherine.
Posted by Woman on a Raft at 7:35 am 6 comments:

The Mail carries the serious case of a pub singer who now has a recorded arrest for a racially aggravated public order offence. The arrest will show up on an enhanced CRB check if he wishes to work with children; for example, becoming a music teacher or a volunteer. It could damage his chances of being employed by other holiday operators. No charges have been brought as the police have snottily accepted that "There was not enough evidence to prove a criminal offence had been committed". For Simon Ledger an arrest is not much less serious than a conviction and amounts to oppression where the process is the punishment, regardless of any finding of guilt.

Ledger, a seasoned popular entertainer, said he hadn't done anything except sing the the 37-year old pop song, Kung Fu Fighting - as he regularly does. It's older than he is. Ledger was playing the song when two tourists walked past the Driftwood beach bar in Sandown. This is the Driftwood website and Simon's is the first video on the left, "Duelling Organs".

One of the guests - a young man - objected loudly, abusively, giving him hand signals and shouting that they were wankers. The BBC implied that the tourist then claimed to have been subjected to racist abuse in return and subsequently complained to the police. However, Ledger claimed that the complaint is about the song, not anything else. As he has been an entertainer for over a decade - nearly two according to friends - it would be surprising to find him getting in to a slanging-match with a heckler who didn't care much for his choice of music.

After the 5.30 set the Hampshire police (presumably the Sandown team) traced Ledger to a local Chinese restaurant - which must have taken some doing rather than identifying him and visiting him at home in Shanklin - arresting him at 10pm. A spokesperson for Hampshire police said:

"a 32-year-old man of Chinese origin had claimed he was subjected to racial abuse.

He added: ‘If a victim believes that an alleged crime is racially aggravated, the police will treat it seriously. Investigations into this incident are continuing.’

The spokesman said a 34-year-old man was arrested on suspicion of causing harassment, alarm or distress under section 4a of the Public Order Act 1986"

It is now apparent the police arrested Ledger on the basis that a Chinese person didn't like the song a white man was playing. let's have a look at s.4A to see what it says, edited for the clauses which apply here:

4A Intentional harassment, alarm or distress.

(1) A person is guilty of an offence if, with intent to cause a person harassment, alarm or distress, he—

(b) displays any writing, sign or other visible representation which is threatening, abusive or insulting,

thereby causing that or another person harassment, alarm or distress.

(3) It is a defence for the accused to prove—

(b) that his conduct was reasonable.

(4) A constable may arrest without warrant anyone he reasonably suspects is committing an offence under this section.

From the top: it was obvious that there was no intention (4A1) to cause offence because it is objectively impossible to cause offence by singing a 37 year old song which generally praises the cats for being as fast as lighting with expert timing. Whether it is about a fight or a martial arts display, it acknowledges the innate superiority of oriental technique over Yardie hack and slash thuggery. Or it might just be a damn good disco tune. Here's a live performance to a German audience, which accounts for them looking baffled:

If Simon Ledger had wanted to cause offence - which he didn't- he chose the wrong song to start with. You can't commit this offence by accident; you have to have the intention to abuse or insult or be aware of the potential to cause it. There might have been an intention to amuse, but that's not a crime. The CPS advice makes this clear in their own stumbling language:

Section 4A .... is intended for the more directed and persistent type of behaviour required to prove the elements of intent and causation.

In this case, it isn't even possible to accidentally cause offence. No reasonable onlooker could regard the words or actions as abusive or insulting in the context of a beach bar. This isn't an abusive or insulting song and it is incapable of causing harassment, alarm or distress in normal play. (1a). Perhaps if it was on a continuous loop it would become distressing.

However, the viewer claims he was caused (1b) harassment, alarm or distress. How was he caused it? There is no causative link between the song and his reaction. He may have experienced harassment alarm or distress, but that's only because he appears to have completely misunderstood the song. Any causation is in his own mind, nowhere else. This is completely subjective. That cannot be the yardstick for a criminal offence - although the police keep misunderstanding this - because people subjectively believe all sorts of things which are not objectively true.

The song is internationally famous for having topped both the US Billboard and UK Singles charts in 1974. As a result, the story of the arrest has been picked up around the world. Singing the song was reasonable. (3b). This is a complete defence. If Hampshire police are so bothered about it, perhaps they should raise an international arrest warrant and go after Carl Douglas, who now runs a publishing company in Germany. They can take in to consideration his follow-up "Dance the Kung Fu".

Given the above, the police did not have reasonable suspicion (4A4) for an arrest. All they had was the inexplicable reaction of somebody who was 'of Chinese origin'. So what? There is no shortage of upset people of every hue. Last week I met a person who was sincerely convinced that their enemy was harassing them by going down the street and switching the D-lock on their bicycle to an identical one for which they didn't have the key. This is not grounds for arresting an ex-lover. It's grounds for checking that the keys and locks are properly matched and that the medication is not over-due. There is not automatically a crime, no mattter how upset the complainant is.

The mental element of intention is so important that it is repeated at 6(3). To be guilty the accused person must have intended offence, or at a minimum been aware of the ability of a song to be insulting. This song in the context of a beach bar is not distressing to anyone except those who are allegic to disco.

This would be funny but for three things:

1) Simon Ledger now has a file which could be used against him in the future.

2) The police do not appear to understand that 'taking a complaint seriously' may not automatically mean 'arrest somebody'. They first have to establish that there was an offence at all, and the playing of Kung Fu Fighting cannot objectively be one in the context of a beach bar, no matter how subjectively the complainant - who has not been named, unlike Simon Ledger - feels it is. The CCTV footage which they could have examined before jumping in with their size 9s, shows the complainant was the one abusing and insulting Simon Ledger. I doubt the police will be arresting the complainant, though.

3) The only person here who has been a victim of harassment is Mr Ledger. The going rate for false arrest compensation is about £4k plus costs, plus a grovelling apology from the Chief Constable about "lessons learned". Ledger could argue that the arrest itself was racially aggravated since the police thought it was alright to arrest a white man in order to placate someone of a different ethnicity According to the Mail, their police sources kept insisting there was 'more to it'. No there wasn't. That was character assassination in order to try to support the police officers' outrageous behaviour.

Chief Constable of Hampshire Constabulary Alex Marshall can be thankful that somebody has stopped the stupid case running. Ledger should take advice on claiming for false arrest as the lemon-mouthed "not enough evidence to show an offence has been committed" does not amount to an apology and a public acknowledgment that playing a song cannot be grounds for arrest merely because somebody who is not a white caucasian has complained about it. It leaves the tainted idea that Ledger may have done something criminal but that they just can't prove it. He did no such thing. It also fails to acknowledge the distress which the police have caused him since Sunday night.

Let's have a Spartacus Action down on the beach. Put on an outdoor production of The Mikado and see if Hampshire Plod would like to arrest an entire amateur operatic society for dressing up Chinese-style, and don't forget to arrest Aladdin when he next does panto during the turkey'n'tinsel season. I've got a little list... 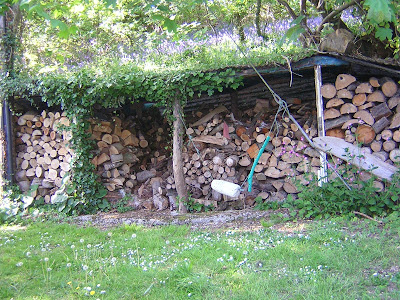 A woodstore several days ago.
I keep a lookout for these now and note the rising popularity of wood burners. In a stand of sensible, although superior, new-build houses a small woodstore was provided as a standard next to the dustbin.

This was a grander one cut in to a hill in woodland - presumably contributing the fuel - so it had a bluebell wood just above it.
Posted by Woman on a Raft at 7:51 am 18 comments: