There is a parallel between the 1965 vote on the abolition of the death penalty and the 2013 vote on same sex marriage.

The vote on same-sex marriage went 366 in favour to 161 against. That is, approximately two thirds of the House supported the government. The larger part of the one-third opposition was not the Opposition at all; it was the government's own party.  In a free vote, the government only got its bill through by doing deals with the party which it nominally opposes.


In 1965 the Labour MP Sydney Silverman, who had committed himself to the cause of abolition for more than 20 years, introduced a private member's bill to suspend the death penalty, which was passed on a free vote in the House of Commons by 200 votes to 98. The bill was subsequently passed by the House of Lords by 204 votes to 104.

Source: wiki, which goes on to detail the exclusions and parliamentary technique used to present abolition as suspension.  The split, again, was a two-thirds for change, one-third for the status quo.  Note also in subsequent developments that there was a deadline; the abolition had to be enacted in English law before a European-set deadline. If it had not been done then the authority of European law would have become much more visible to the voting public.  As with same sex marriage, the impetus is not from within Britain but to disguise the fact that the real power comes from outside it.

Despite the parliamentary feeling that the argument about the death penalty is done and dusted, no politician would dare put the matter before the public.  The public is much less convinced that there is any point in keeping Ian Huntley breathing, and it is about to ask the same question of David McGreavy who has failed in his bid for anonymity.  Despite what some people claim, the law does not lead public opinion as much as they would like, nor is it clear that we get good law when it tries to do so.

English law jumps before it is pushed in order to disguise that hand of the pusher.
Posted by Woman on a Raft at 1:52 pm 7 comments:

Plays of the Century

A pair of plays bracket the boom years of the end of the 20th century.

The first is Glengarry Glen Ross, the David Mamet Pulitzer Prize winning masterpiece which had its world premier in London in 1983.  This is the eve of the spread of the mobile phone and the salesmen in the seedy office do not have them, not even smoothie Ricky Roma.  Consequently they can do nothing when the telephone handsets are stolen.

In pitiless observation of their language and values, Mamet exposes what they don't want to face; they couldn't do much when the phones were there, either.  They just like to think they can.  The numbers don't stack up; the junk estate they manage to unload on to fools is still not enough to pay for the time they spend hunting for the next mark.

They like to think of themselves as natural raptors but at that point in history there weren't enough stupid, juicy mice to sustain them.   They believe their Jedi sales skills will work for them so long as they are allocated the Glengarry Glen Ross leads but there is no good reason to suppose that those leads even exist.

The office manager thinks these leads are what the firm has bought. He has to distribute them to the salesmen who can best convert them in to sales as shown on the competition board. But there is no reason why there should be a pool of convertible leads for swampland. We never know if the land itself is real.  It's possible that the leads are just a mirage the firm has bought. It's possible the firm's owners know it is a mirage and are playing their own game of pretending to have a profitable company.  The only time the leads have a quantifiable value is when they are stolen and palmed-off on to the next desperate re-seller.

The only people who get anything out of it are the Nyborgs, a couple who like having the attention of a salesman and can do so in safety because it doesn't matter what they sign; they haven't got a bean and the contract isn't enforceable.

In 1987, when Oliver Stone and Stanley Weiser created the character Gordon Gekko for Wall Street, they rooted him in the land speculation of the 1970s, when the early-entry gamers had parceled-up and moved on their junklands to intermediaries.  Ten fictional years later, this office is a long way down the pyramid where Gekko is the pinnacle. It is the last step before the weak James Lingk (weak lingk, geddit) who is induced to sign a contract by Roma. No matter what the salesmen think of themselves, Mamet has positioned them at the bottom of the pyramid of losers, unless they manage to find the one bigger loser beneath themselves - and even then, the law will help their prey escape.

Mamet was appalled to find that far from taking the play as a warning, he had accidentally created a feedback monster and that this was used as a training manual.  The latest incarnation is the Alan Sugar vehicle The Apprentice, where a group of young people are encouraged to shred each other for the edification of the viewing public.  Glen Sugar.

The second play is Enron, Lucy Prebble's explanation of the collapse of the company.  Although the dialogue is wonderful it has to do more technical exposition than Mamet had to because of the breath-taking scale of the fraud.  How could something that big be hidden?   Here we see the same kinds of   people, still selling, still voluntarily blinding themselves to economic reality, only now they have a great deal more money because the boom years have persuaded them they are fantastically clever people instead of what is nearer the truth: they have been unbelieveably lucky.

The fictional Ricky Roma gave philosophical soliloquies which justified his actions; the fictionalized Jeffrey Skilling is similarly given speeches with queasy half-truths in them. Bubbles of inflated value have made things such as railway construction possible and we wanted it all to be true .

Prebble wrote a show which is geared for the modern stage using surprise motifs which wouldn't work in film.  Whereas Glengarry Glen Ross is a realist drama, Enron owes more to forms such as Greek tragedy,  a big canvas of tragedy compared to the intimate study of misery.  Mamet takes small people and enlarges them in to monstrous detail, Prebble has to take a huge event and find a way to contain it on the stage.   Alas, you'll probably have to hope somebody stages it near you or buy the script as there don't seem to be any listed productions at the moment.

This week it was announced that Jeffrey Skilling may be able to negotiate a deal which will see him out of prison earlier much earlier than his original sentence demanded.   Although he presided over the biggest bankruptcy in US history, his mistake appears to have neglected to be a bank.  Then he'd have been bailed out by the tax payer, probably still had his job and possibly still have been given a bonus while losing money.
Posted by Woman on a Raft at 10:18 pm 5 comments:

This is the Official Seal of the tall ship Mercedes, a brig on which I had the honour to sail at Easter. 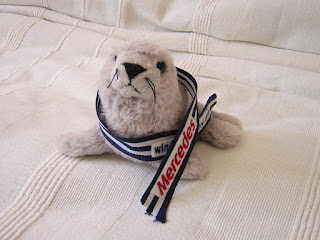 When I say 'sail' I mean I sat there as excited as a ship's dog and they did all the rope work and sailing, then we went back to port and had lunch there as it was too fresh to try that on the waves.  I had fish - what else would you eat at sea.

Mr Raft, who likes roller coasters, was standing on the prow so he could ride the waves outward. I stuck to the midship, me hearties, and watched the land because the potential for seasickness is obvious in us wet-bobs. The journey home was serene as we were running smoothly with the waves under the silence of the sails.

I can't say that I will ever be a sea sailor but I do love to look at tall ships - doesn't everyone?  The good news is that in late summer 2014 there will be a tall ships regatta in Falmouth where they hope to assemble a world-class fleet of the most beautiful vessels ever built by man. (*).

Here's a video of Mercedes under sail

(*) Concorde is the most beautiful craft ever built by man if you include flying.

Dates for the Tall Ships Regatta 2014 have been confirmed.   There will be three days of festivities from August 28 and the race will be on 31 August.

Everybody will be able to enjoy the spectacle of  a fleet of up to 50 tall ships coming in to harbour, where the public will be able to see round some of them.  The ships will race from Falmouth to Wight.