Murph Guest and Freedom of Expression

Ray 'Murph' Guest is a paramedic at the West  Midlands Ambulance Service.  He doesn't like the fact that some people have dared to complain about the treatment their relatives received at Stafford Hospital and that the Francis Report agrees with them that it was shockingly bad. 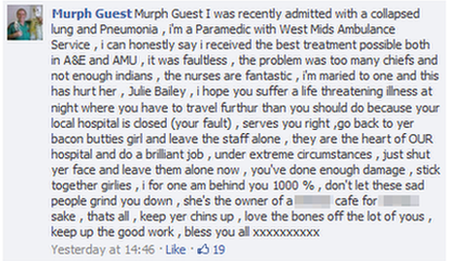 Specifically, he wished that  Julie Bailey would suffer a life-threatening illness. It didn't appear to strike him as at all inconsistent with being a paramedic or that it might reflect poorly on the people around him.  His main purpose was to show that they are in fact wonderful people.

According to the Telegraph, Julie Bailey has informed the police on the grounds that:


“I believe that this man is an ambulance controller. I am concerned about what would happen if I was to have an accident and I was to phone the ambulance service and he was there in the control room.”

Whether this is a police or a professional standards matter is not clear at the moment. Mr Guest seems to have fallen out spectacularly with his father after the death of his father's wife (who may or may not be his mother) and his father had joined Ms Bailey's protest group, Cure the NHS.   There is an element of family business here and Julie Bailey has been caught in the crossfire.

However,  Guest has established one thing clearly: some front-line staff despise the patients.  They wish them dead, seeing the maintenance of the NHS as the point of the job rather than the alleviation of human suffering.  They hold opinions which make one very much doubt their willingness to do the job without having their arses licked, such is their fury at criticism.

At this point somebody usually jumps up and says "But it's  only him, not fair to judge etc".   But he's not the only one. He is like the pox blister which shows the corruption running through the blood.  Bailey has had a five year fight and been repeatedly rubbished.  Even now, when an inquiry and report has shown she was right to complain, the arse-covering Powers That Be are busy trying to make her seem like the unreasonable one for insisting that they must remove the corporate mask and hold accountable the individuals who failed.

But Murph Guest has accidentally blown the gaff by sneaking out from under the control of smooth PR operators. What he and the Powers That Be really believe is that old, dying people are bloody nuisances but for whom hospitals would be clean, target-hitting places.

So let's hear it for freedom of expression. This is why you have to have a free press and free speech - otherwise you don't find out what they really think.

Update 30 May 2013:  Nick Cohen at the Spectator reports that a campaign of intimidation has been waged against Julie Bailey.

Update 25 June 2013: Guido Fawkes reports that a campaign of intimidation, including vandalism of Bailey's late mother's grave, continues.
Posted by Woman on a Raft at 3:26 pm 11 comments:

Stephen Hester is a banker

Who is Stephen Hester?

Stephen Hester is the Group Chief Executive of RBS.  The one who was narrowly persuaded to go without his bonus.


Hester is paid an annual salary of £1.2 million by RBS.[1] Alongside this, he took home £6.5m in bonus and pension payments in 2010.[8] In 2012 he was offered a bonus of just under £1 million, following some considerable pressure from politicians and the public, he declined the bonus.

You may have heard of him being disgusted and depressed about the 'selfish and self-serving' behaviour of his staff during the LIBOR rigging scandal.  Apart from banking, RBS is also 75% shareholder for Direct Line  which operates several brands of insurance.  One of these is Churchill

Churchill is part of the Direct line group, separately listed from RBS.  It is headed by Paul Geddes.

Now let us go back in time, this isn't about banking.  It's about insurance.

Founded in 1989, Churchill is now one of the UK’s leading providers of general insurance, offering car, home, travel, pet, van and motorbike insurance over the phone or online. Many of the products are award-winning.

In December 2009 the then-thirteen year old Bethany Probert took it in her head to walk home from horse riding at about 5pm.  The accident happened  on the Abthorpe Road which runs between Silverstone (NN12) and Abthorpe.  You can see it for yourself on Streetview, which toured the road in good weather.  The road is picture-postcard England, with straights, narrows,  and shallow bends between hedges dotted with mature trees.

Yes, she could have waited for her mum to pick her up, but showing a spark of initiative and not being a prisoner, this schoolgirl decided to do what, at any other time in history, would be regarded as normal. She started to walk home on the country road. It was after sunset but it wasn't the middle of the night. Even in December people can be reasonably expected to be moving round at 5pm.   Being a young teenager, she didn't think to dress up in a hi-vis jacket, which is not a legal requirement. She also may have been listening to music. That's legal too.

The road doesn't have a footpath or lighting. It has hedges which  tend to lean in to the road, obliging pedestrians to walk a little further out.  The speed limit is 60 but speed, as we are often told by the better drivers, is not the point. Conditions are the point, and the conditions did not admit that 55 year old Mr Paul Moore, who was on his way to work for his 5pm shift on the far side of Silverstone, should travel faster than 40mph in his Saab 9-3.

Unfortunately, he probably was traveling faster than that.  Seeing an on-coming vehicle, he changed his position on the road, pulling left, closer to the hedge where Bethany was walking.  Pedestrians are advised to face oncoming traffic but because of the hedges and a bend there, Bethany was on the narrow grass verge or the tarmac - it is thought she may have had one foot on each - rather than the advised side . For that particular point, she was on the correct side because of an approaching bend and a lack of a footpath (see paragraph 44 of Mr Pittaway's adjudication).

Mr Moore did not see Bethany because he was focused on the oncoming vehicle. He hit the girl.  She was wearing dark clothing.  Had he been traveling more slowly and remained aware that the pools of shadow under hedges might contain any number of things - dogs, deer, junk, even walkers - then he might not have had the accident.

Bethany did not die but the head injuries effectively ended the independent life she might have had. She requires full-time care from her mother but she's alive and can move round.  Mr Moore didn't set out to hurt anyone, but the reality of driving is that you can, purely by miscalculation.  Eversheds summarized the court's findings; liability was established against the defendant.

Fortunately,  Mr Moore had insurance from Churchill.  The child cannot be put back as she was, but she can be cared for.

But Churchill doesn't want to pay up.

When the case got to court in August 2012, by which time the child's condition was clearer, Churchill argued that because Bethany was a horse rider, she should have known about wearing a hi-vis jacket, even though she wasn't riding a horse at the time.  The court found that you can't expect a 13 year old girl to carry the same degree of responsibility for her action as an adult might. Besides, Mr Moore was not looking where Bethany was walking; he was focused on the oncoming vehicle.

Churchill argued that she was negligent in listening to music, otherwise she would have heard the Saab coming.  The court replied, based on the opinions of the accident advisors, that the noise of the oncoming car would have obscured the sound of the car behind her.

The insurers said they want to appeal.  Mr David Pittaway QC, hearing the case, wrote that he thought they were seeking to reopen the issues which have been decided.

Despite that we now read that Lord Justice Ward has granted permission that Churchill can take the case to the Court of Appeal.  Apparently, there is an argument that it might be alright to run children over if they aren't dressed as Christmas trees, psychic, and happen to be walking home in the country after sunset.

However, this post is not about about the strict legality of an insurance firm being able to go to the extent the law allows in order to avoid doing what it says on the tin: taking the financial pain away when there is a terrible accident.

This is about Stephen Hester of RBS and Paul Geddes of Churchill, who should stop pissing about and pay out £5m as directed. It will cost them that anyway; it's just a question of whether the lawyers are allowed to gouge more of the £5m out for their fees, or if it should all be paid to the girl.

£5m is less than Stephen Hester earned in the single year 2010.

The money, although substantial, can't be the issue. If it was, RBS  wouldn't be paying out bonuses of £1.5bn to staff in its investment arm. £5m is chicken feed in comparison.  The taxpayer owns at least 75% of RBS, and  RBS is the 65% shareholder in Direct Line.  RBS received £1bn in dividends from the flotation.  The Probert settlement has to be managed to keep Bethany and her mother the rest of their lives, since her mother has had to give up work to care for her daughter. If Geddes and Hester were told to pay it personally out of their own fortunes, they'd barely notice it.

Stephen Hester has two children as does Paul Geddes .   How might either of them might feel if their child  was smashed in to a hedge and then they had to spend three years fighting for the compensation which insurance is supposed to provide.  But then, earning a basic £1.2m a year, I expect Hester would  be able to airily wave it away and pay someone else to do the hard work of looking after the child.  If the worst came to the worst, he could sell the 350 acre estate in Oxfordshire or the ski chalet in Verbier.

Stephen Hester should ring Paul Geddes and tell them to settle before the stink does any more damage to the group ahead of the remainder of the divestment.  Geddes shouldn't even need telling. That he does, tells us something about the failure of Hester to inculcate a sense of duty and decency in his staff.  Hester will no doubt argue that under European Competition Law, he's not supposed to tell his executives what to do.  This isn't about European  Competition Law - it's about duty and decency.


It is the duty - already  admitted - of Churchill is to pay this claim.  Decency dictates that they pay the victim, not the lawyers.

THE boss of Royal Bank of Scotland will be handed a £780,000 bonus just weeks after the bailed-out lender was fined £390m for its role in the global interest rate rigging scandal. Stephen Hester is set to pocket the share award next month.  RBS, which is 81% owned by the government the taxpayer is adamant that Hester should receive the payment, which was granted in 2010, as he has received only one annual bonus since joining RBS in 2008.

Ah, poor lamb. If only he'd been wearing a hi-vis jacket.