Job of the Month - Whitby

This one doesn't pay much but it could be a peach for somebody who wants to be slap in the middle of the action at Whitby.  The New Angel Hotel wants a full time receptionist.

Chain JD Wetherspoon have refurbished the dowdy building in the modern nautical style; all glass balconies and minimal steel rigging which evoke 1920s cruise liners and yachting.  Opening is projected for 28 March.

Application is online - there are only a few days left for this job - and they have a facebook page which charts the renovation.
Posted by Woman on a Raft at 3:16 pm 8 comments: 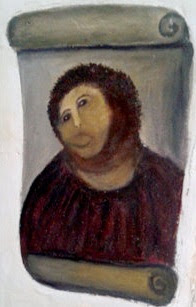 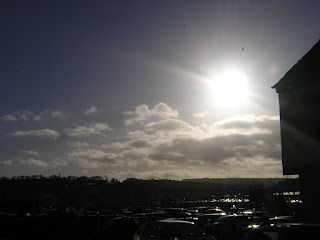 To Whitby for a dash in the sunshine. Parking on top of the cliff the wind naturally tried to grab my hat and throw it in the sea, but I'm wise to that trick and had it firmly fixed on.  Walking down in to the town there is the protection of the cliffs so the wind drops.  As you may have seen, the rain combined with poorly maintained drains have caused a serious landslip just below the church.

None of this deterred the thousands of visitors today so the restaurants, pubs and any shop which cared to open did a fair trade.  Lunch was at Mr Chips in Church Street, down beyond the swing bridge in the sheltered moorings of the Esk, where Mr Raft had the selection platter to try everything. 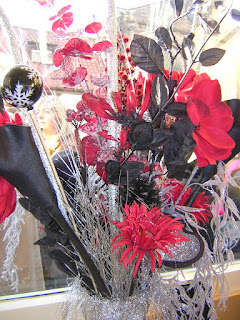 As this is the Goth Capital their seasonal decorations were in the festive Goth colours of  red, black and silver. So, just like normal really, but in a festive arrangement which should be easy to copy and requires no maintenance since none of it is alive. 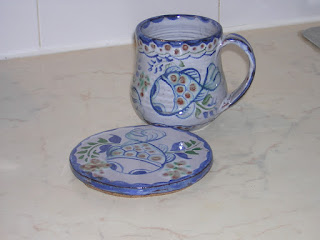 After lunch we wandered along and found an alley which I had not noticed before although it has always been there.  Since 1982 - how on earth can can I have missed it? -  it has housed the Washhouse Pottery where Laureen Shaw produces pots and tiles which riff on traditional Delft designs.

She and her husband also rent out the house they restored, Pottery Cottage.  The third photo down on that link is of the pottery which leads in to the courtyard where the cottage is.  Bought a sweet little slab coaster for the desk in a fish design.

Walked back to One-O-Five, the jet workshop where Kevin Dixon was spending the last day of his season producing jewellery and carving exquisite jet sculptures.  As of tomorrow, he's shutting up the shop and going to his annual retreat and source of inspiration, watching animals in the jungle. I think that's why his tiny lizards, bats, rabbits and snakes seem ready to dash out of the display cabinet. He'll be back at Easter, ready for another eight months.

The snag with the job is that it is a seven-day-a-week business now that Whitby has visitors from Easter to New Year.  Kevin remembers when they used to roll up the road just after the summer holidays and store it with the deck chairs in the pavillion.  Unfortunately for Whitby, it is ruled from Scarborough which has failed to get on with setting up the park and ride schemes which tourism needs if lack of access is not to deter people from spending their money down in the town.

Whitby has much more in common with the other towns along the Esk valley; they should be making their own decisions in their own interest, not being treated as a source of  car parking revenue for Scarborough's benefit.   Freedom for Whitby!
Posted by Woman on a Raft at 9:57 pm 22 comments: