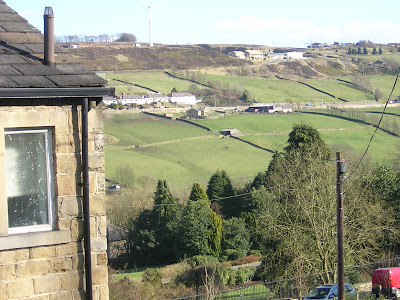 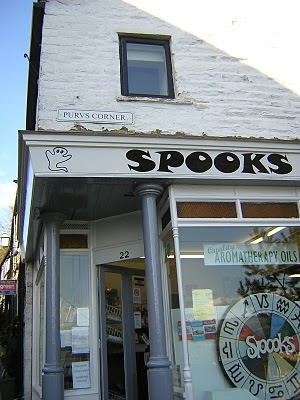 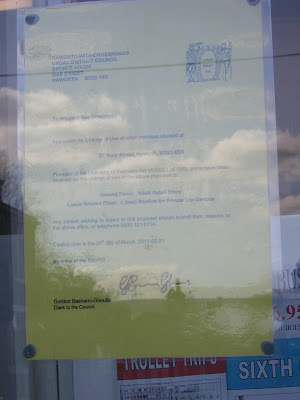 Update: A controversial Radio 3 dramatisation of Wuthering Heights is being aired. It has gone all DH Lawrence and has Cathy and Heathcliff swearing at each other.
Posted by Woman on a Raft at 7:30 am

My part of the world, and a marvellous piece. Thank you.

Great story, & made me smile.

But sadly, unless the clerk has very recently changed his name by deed poll, is the mundanely named Glyn D Broomhead

And yet there is Gordon Bashami-Ghoulis on the planning notice photographed by Mrs Raft. Perhaps he is from The Other Side, and in charge of spiritual planning, whereas Mr Broomhead restricts himself to temporal matters.

Or maybe it's an early April Fool.

There's nothing mundane about being called Glyn D Broomhead; with a name like that he really should be running a supernatural supplies shop.

See what I mean about Haworth?

What beautiful writing.
I read it three times.

and he claims he dosnt run a sex-shop.

I have my doubts.

"The sign on the wall says Purvs Corner and the shop stands on the junction with Butt Lane."
Ha,ha! - that made 'oi larf...

We used to have a Chief Public Health Inspector by the name of J.H.Smellie - I kid you not! His name was on the side of every dustcart & street cleaning vehicle....

If you go down Butt Lane and turn left, you find Penistone Mews.

There is a vacancy on the parish council; we may have to find a mole and get them to apply for the seat to get to the bottom of it.

Buxton in Derbyshire has a similar tourist trap 'don't mention the hill'.

Made me smile. Love your take on Haworth. I didn't know about that Radio 3 dramatisation but I suppose they would have sworn at each other.

WOAR, you are a national treasure.

For anyone who hasn't followed Welshcakes Limoncello, she is always a good read and an uplifting example of getting out there and living life.

You should take a look at Thornton, where the O'Brunty sisters were born, and not too far away. A nice bike ride from there to Haworth via Denholme.

Whitby is the Goth Capital of the world.

Over the last decade a spontaneous business has developed - with some disagreements in the last year - which brings thousands of Goths to the town to spend their money and take part in a huge public spectacle. On a good day it reprises William Powell Frith's 1852 painting "Ramsgate Sands".

Thornton does indeed look like a good place to stop for dinner. I must investigate further.

The goth styles of 25 years ago were quite charming. Pale faces, purple lipstick and fingerless gloves are very fetching on a slender young thing - even better if it's a girl.

But if you find yourself in Whitby during a Goth Weekend, let me tell you it's a truly scary sight on an overweight, fortysomething mother of three.

I'm not sure they do "dinner" in the evening in Thornton. Dinner will be at lunchtime. There's a spectacular viaduct across the valley, some fair pubs, and streets with names like "Chemical Street".

Just took a google - can't find Chemical Street. Sure it was there. Dole Street still exists.

I loved the bit about the wheelcahir hitting 120 mph! Hilarious!

In the film, 'The list of Adrian Messenger', there's a scene when some thugs push a guy in a chair off a cliff or into a harbour. (It is a murder story after all)!

The cinema erupted into bedlam, because the boozed-up Saturday night lot were sitting along the back row, and all shrieked with laughter when it happened!

I'm sorry to say, we all laughed at them too, and felt sorry much later...

Having just read the synopsis of the film, Scrobs, it seems like there was quite a lot of scope for inappropriate hilarity.

I'll have to get hold of it.

Do they still have a sign up at Bradford station saying, "Welcome to Bronte Country"?

I guess there it was apt. Well, in terms of your chances of getting TB anyway.