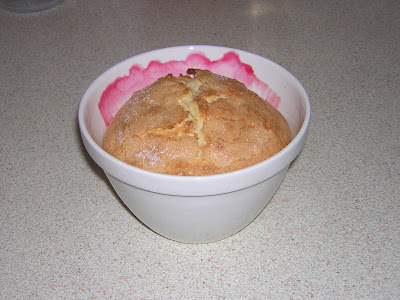 Despite the rain the garden has given usable fruit.  A dish of pearly blackcurrants, emerald gooseberries and ruby wild strawberries.

Two or three cups full, that's all you need for a summer sponge pudding.


Wash and prepare the fruit, place it in the bottom of a pudding basin and add a decent dredge of sugar.  Put it in a cool oven while you mix up the sponge.  If you do this, it makes the cooking time more reasonable.


Mix up sponge topping made from;
2 oz sugar
2 oz butter
1 egg
3 oz self-raising flour
and a splash of milk.

The consistency should be soft so that it drops off the spoon.  Take out the warm fruit, turn up the oven to about gas mark 5, and add the sponge topping . Add an extra sprinkle of sugar on the top for prettiness. 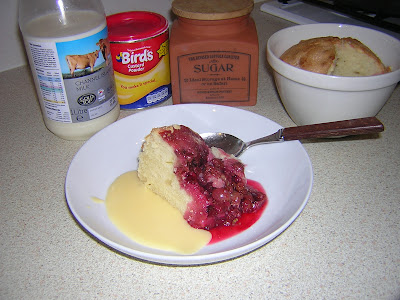 Bake at gas mark 5 for about 30 minutes. Check that a knife comes out of the sponge cleanly. If not, leave it for 5 minutes longer until it is ready.

You can cook this on cold fruit but it seems to take much longer to reach the temperature which makes the sponge puff up.

Serve with cream, custard or ice cream.
Posted by Woman on a Raft at 4:29 pm

Our raspberries are beginning to ripen. So, along with black/red currants and some stewed apple from the freezer I shall make this old family favourite this weekend. Served with 'proper' English custard.

Raspberry has a wonderfully distinctive taste and smell when you get it from the garden. The supermarket ones are OK but something is lost in the transport.

One thing I have noticed is that pottery pudding basins with their slightly conical shape seem to produce better results than flat pans using exactly the same ingredients.

Go figure. It might be something to do with the way the steam travels up through the sponge mixture.

Our raspberries were disappointing last year, and this year doesn't seem to be turning out any better. But yes, when they are good, they are really good! Though we had to be quick years ago, as our dog developed the habit of picking his own!

Looks delish and defo a few of your 5 a day!! Quite right about raspberries, oftentimes supermarket ones just seem like squidgy tasteless matter, and blueberries too; dare say you could work them with sufficient sugar but kinda defeats the object really.

A dog eats raspberries - that's a new one. I wonder if it was because the dog found they were sweet or if it was a catching game.


The finest blueberries are in fact bilberries and they grow in great carpets on the moors in Yorkshire, particularly Sutton Bank.

Being wild they are smaller than the commercial cultivars so you have to work harder to collect enough but the plants are very generous. I've seen large families going up for their free treat, looking like a cloud of very fat sparrows.

Sutton bank is easy as it is just a little stroll up from the car park.

Regarding raspberries; has anyone noticed that this year there were ZERO honey bees on the flowers? Yet there were many rather small bumble bees to take over the niche.

WOAR: I would only ever use the sort of dish you picture. By proper English custard I meant bog standard instant, none of this infusing vanilla pods malarkey.

I'm no good at bee identification but Mr Raft and I both noticed that the numbers of bees seemed lower.

The beekeepers at exhibitions last year were warning that colonies had been dying; they have had problems with mites which has been building up for years. Nobody seems to know quite why the population is falling so drastically; there are various explanations from pesticides to mobile phone signals.

I don't think the rain can be helping much; even when there are flowers out there the bees can't get to them for days.

"Our raspberries were disappointing last year."

*Sigh* For someone who blows hard, it must have been self-delusion, JuliaM.