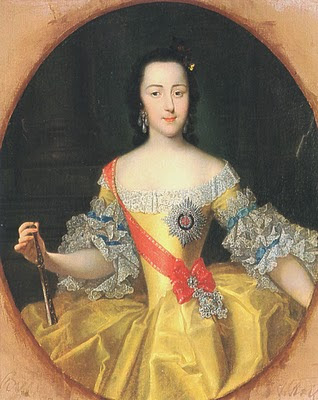 Catherine the Great. She married in to the ruling family and then the CEO, her husband, suddenly died of someone.
...............
Dictatoring is a job which falls in to two distinct phases: getting the job and keeping the job. They require separate skills.

Today, part 1, Getting the Job

Getting the job depends very much on chance.

Politics, economics, outside events, the behaviour of your opponents, mad bastards on your own side; all these change what we careers advisors call 'the environment'. Many of the world's dictators talk as if they could control these, but that is just their ego talking. An ego the size of Basingstoke is the minimum character requirement for a dictator.

Cuddle-up to power while young, but do be careful not to over-identify with any single source of it. Power-sources such as the military or political parties have an unpredictable habit of self-destructing. People will accuse you of not being clubbable; true, but you also won't find yourself with your career over before it even starts.

At this early point in the dictator's career it is more like being the 2nd-in-charge officer on a complex ship on a choppy sea with a mardi crew and half the stores gone. Even that is a simple job in comparison because at least at sea there is only a limited number of people to contend with, unless the pirates show up.

Several notable dictators claim to have been marked out for greatness from childhood but this is wishful thinking. Had they been recognized young, they'd have been drowned in the bath. Instead, in their larval phase they resemble the weedy specky nerdy type with a grasp of detail which makes them valuable to their elders, and so invited to the big table to do the donkey work.

It's only later that the dictator separates himself - and it nearly always is himself although there are such things as women dictators - from the pack.

That is the first career hurdle for a dictator; looking just useful enough to stay alive but not becoming the natural slave-brain, the one which does all the work but doesn't get credited. At some point you may have to choose: do I want to achieve my aims from this position, or do I want to be Leader?

If you are dictator material this won't even be a question for you. Rather, you'll be worried about recruiting your own reliable seconder and finding all the ways you can be in pole-position when the current leader (or nearest approximation) falls out of the window having decided on a breath of fresh air. Windows are terribly dangerous, architecturally. Almost as bad as lamp posts. That's why the streets are often dark in dictatorships.

In general, dictators don't see being 2ic as tolerable for long, let alone negotiable. It's not something which is open to dialogue. You might as well offer vegetables to a toddler, and for much the same reason; toddlers don't like vegetables and they do like control.

"And I'm President of the United States, and I'm not going to eat any more broccoli!"

Howled George Bush Snr. to the delight of US Teletubbies as one of the most powerful men on Earth got a right cob on, thus illustrating that wiser, better men often don't find themselves in office.

The first quality of a dictator, then, is a certain impervious disregard for rationality, proportionality, or any of the considerations which paralyse brighter mortals. Being terribly clever is not the most important thing. Make the clever-cloggs your 2ic but keep a very sharp eye on them. Don't want them getting ideas about doing your job.

The second quality of a dictator is luck, because with those tendencies there's a fair chance you are going to kill yourself accidentally, and quite young. But then so will your competitor dictators, which is why there aren't that many of them.

The third quality is unlimited energy. This allows you to outpace any enemies who, although not direct competitors, would like to see you out of it. While they are sleeping you will be building networks.

Lastly, you will need the spooky ability to recruit a core of the right sort (i.e. useful) followers early on, when you do not yet have the power to dispense patronage. Even those who are themselves acting as your patrons must think themselves privileged at that point.

This used to be much simper in the days of the aristocracy, using the hereditary principle to attract support. That is rarely allowed now. We have had several effective dictators this way, but unfortunately it also brings out a crop of noxious half-wits. Then again, so does democracy and the secret vote-rigging of the EU. Each claim legitimacy to do the job badly. Why can't they just base their claim to keep their job on the basis of competence?

Still, we don't do hereditary succession any more, except if your name is Bush. Or Benn.

It also helps immeasurably to have the good fortune to be in a country with an apathetic and acquiescent majority.

It helps, JP, but any dictator worth his or her salt should be prepared to do SOME pacifying work.

They can't expect it all to be handed to them on a plate, although the young wannabes these days, they think they can sulk their way in to absolute power.

Hark, is that Oliver Cromwell I hear spinning in his several graves.

I think another factor is the sheer enjoyment in telling lies and the capacity to constantly change their own version of events depending on who they are addressing.

I've met a few people who delight in saying things, however trivial, which are patently not true, just for the ego rush of seeing everybody going along with it because they can't be bothered fighting back, and they do seem to get on in life.

And a complete and utter absence of loyalty to anybody or any principle whatsoever seems to help.

Yes..it does seem to work.

Skill in recruitment is everything.

Hiring a diligent food-taster would strike me as an early item on the To Do list.

And a couple of backups.

A good tailor is important. Snappy paramilitary uniforms for your followers don't design themselves. Easier to get recruits if your secret police outfits have sharper cuffs and more, say, deaths-head embroidery.

Also a few talented wet work staff, plus ones to curb the enthusiasm of the early ones when they get too comfortable.

A good ghost writer too. You won't have time to proof-read (or even write) your own autobiography but getting a book of "Collected Thoughts" out there early on is now standard operating procedure.

Certainly a lack of what you'd call real, spiritual loyalty, Mark. But most of 'em have an animal appreciation of the role of the Praetorian guard and the secret knife-man. Both of those have to be protected for personal reasons.

As for Brown, Mr Q, he should never have carried on after that dinner at Granita. He never understood that he failed the dictator question because he did consider taking the 2ic job indefinitely, expecting to be paid off with the no.1 slot.

That's just not how it works. Most party members expected to Gordon to inherit John Smith's throne, the mantle falling whisperingly on to his shoulders. Sod that, thought Blair, why should it? Destiny favours the bold.

Blair offered the choice: fight me for it. You are the favourite, not me, you should romp home. But if you don't then be aware I'll banish you, backbencher. On the other hand, kiss my ring now and you'll do very nicely. Gordon folded. Not the right stuff.

ASE's point about tailoring seems to be borne out by observation. I was looking at the prisoner's uniforms the other day and was struck: they include hats. Somebody went to the trouble of specifying, designing and commissioning hats for people they didn't mean to have heads.

'Doing the job'? I thought getting power was IT.

Blimey, this stuff is tougher than I thought...