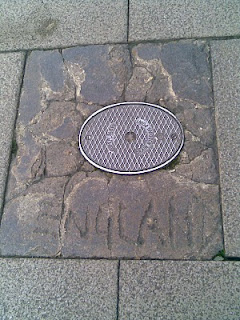 Over at The Anger of a Quiet Man there's a thoughtful discussion of the negative attitudes in the media towards people expressing support for England in Patriotism, Jingoism and Nationalism.

This blog wouldn't necessarily agree with his assertion that it is all down to New Labour, but he's right in that

The media are some way behind the the public in this and only dimly recognize it. People now have a fractured view of national identity and increasingly see themselves as primarily from a particular group, not the quilted identity which was British nationality. It is a trend which accelerated under New Labour.

Sure, there was a deliberate attempt to delete the national identity in favour of some Euro-citizenship, but that began under the traitor Heath. New Labour realized too late that there is a good reason why that Victorian composite, so brilliantly romanticised by Rudyard Kipling, should have been hung on to. A Balkanized Britain is not in fact easier to rule, is not more tolerant or pragmatically integrated - it's the very opposite, illustrated by the police having to protect our own soldiers when they make their Homecoming parades.

People - other than us, of course - don't spend much time thinking about what to write down in the Nationality box on forms. They spend more time doing it than they used to because umpteen forms these days ask about ethnic origin, and they aren't sure what the difference between nationality and ethnicity is. Every time they are asked such a question, it reminds them that they might not be from round these here parts. It subtly tells them either that they are foreigners and always will be, or else it confirms that they have a prior claim on an area based on ethnicity.

All the deductions about what they think and feel on the subject have to be done by asking them - which gets you funny looks in the cafe, guess how I know - or by watching to see what they do rather than what they say.

Thus the significance of the picture above. Given a patch of wet concrete, what would you write in it? If you look at the walls on historic buildings, or the graffiti on modern ones, by far the most popular choice is the person's initials and a date, or a tag for the Banksy wannabes. Football teams come a second outside of religious settings. Swear words aren't as popular as they once were.

(You may be wondering what rigorous survey data I have for this. I don't, but if you find a woman with her nose pressed against what appears to be a blank wall in a church, it will be me reading the spidery tattoo in the plaster and stone. People leave marks the way dripping water builds limestone caverns. People being what they are, if you find a reachable stalagmite, some bugger will have carved their initials in it.)

Yet here, given the dream surface where he - and I think it was a male but could not explain why - could have put his hand print, or the name of his muvver or luver or footie team, thus permanently recording his own existence, the person writes the name of the country. We don't even know if he's English - he doesn't have to be, he's just some bloke writing a word quickly. He obviously didn't have long - it's not exactly copper-plate italics, is it?

He can't mean it as a geographical note. We know we are in England and so does every one else. It is a clue in concrete, but why of all the words in the language was that one, that name, right at the top of his mind? It means something when a person chooses that word above all others, but exactly what has yet to become clear.
Posted by Woman on a Raft at 12:27 am

There are female graffiti artists, but in tiny percentages to their male counterparts. It's the male who feels the most need to mark out his territory.

I suppose we should be grateful that he actually wrote a WORD, rather than the depressingly familiar male genitalia that seems so common in these things...

The Uses of Literacy. :)

Mr Puddlecote alerted me to your presence Mrs Raft, it's wonderful to see you here !

Similarly, hat-tip to Mr P for letting me know you were here. Bookmarked and linked, most definitely.

Very good observation mid-post that it is the constant asking by authority to put yourself into tick-boxes which makes you think of yourself in terms of those same boxes.

Indeed they have become artificial and yet powerful enough to cause the creation of "Jedi".

I saw a reference the other day to a Septic referring to a black Englishman as "African American" because he was so conditioned to use the phrase. And yet "Negro" is an option on the US Census form this year.

We are all tick-boxes now.

Good evening Mr TFB. Hope the vegetables are doing well this season. This year I've not had to resort to watering but then it is so dark and cool that everything is behind.

Good Evening the All Seeing Eye. I'll post an example of a monitoring form later in the week, if you can bear the excitement and suspense.

There's about three pages of it and I'm just researching the agency which issued it as it may be one which could be cut. The irony is that is a quango which was created under the last Conservative government but seems to have grown quietly in the dark.

It's so easily done. People mean well. A small thing seems like a good idea and yet gradually it turns in to a monster, like the plant in The Little Shop of Horrors.

Feed Me, Seymour.
Clip from Corman original. Gravis Mushnick has a florist's shop which is nearly broke. He tries to fire Seymour Krelboin to save money, but Seymour insists he has a a sure-fire plant which will make their fortune.

If certain residents of the UK can have their own parliament or assemblies, then the rest of us have to make-do by referring to ourselves as 'English'.

Good to see you WoaR. Oh Joe, our parliament was just reconvened. :)