Down at the old Bullen Bush: Sloe Gin 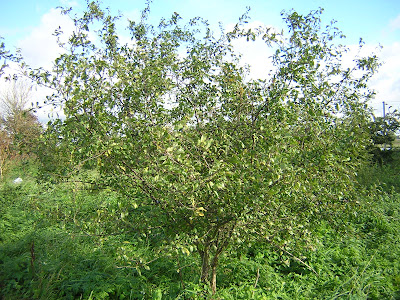 This is a bullen bush. You have only a few days left to find one - usually on the edge of a park or wasteland - and harvest the berries. They've had all the sun they are going to get and now have the maximum sweetness a sloe achieves, which isn't very much. The frosts should have encouraged the interior cells to burst, which is quicker than mucking about with a fork. When the berries are perfectly ripe they will slide off the branch between the wicked thorns, which saves having to pick out their little stalks. As the wind has combed the leaves off the bushes now it is easier to see where the knife-thorns are. 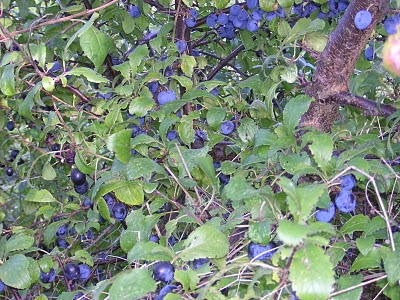 Take care when gathering the them; blackthorn is notorious for spikes which easily turn septic. It is not a suitable job for children. Always promise the bush that you'll plant a few of its cherries in a new hedge and wash hands very carefully when you get back. I'm surprised it isn't more widely used as a security plant as it is graceful and doesn't go dropping dead every five minutes. When the leaves are off it is easy to see its Gothic architecture and it would be a simple matter to prune it in to shape. The dry twigs are said to burn with a bright smokeless fire. 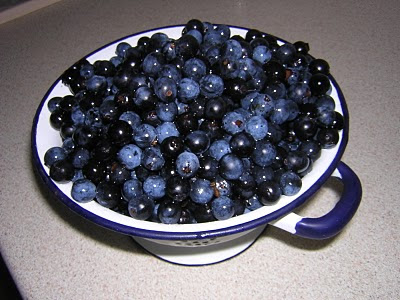 Wash the berries, discard any remaining stalks or leaves, and either freeze them in 8-ounce portions or get ready with a lotta bottles. 8oz is approximately the volume of 40cl. It is the interstices between the berries which determines the amount of sugar you can cram in. This is chosen purely because the bottles I'm using happen to be 70cl. 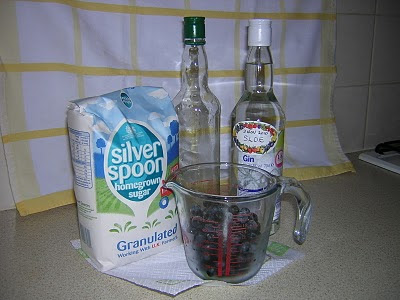 For the next trick you will require two 70cl gin bottles; one full, one empty, and a calibrated jug as this recipe works by volume. As you are going to add berries and sugar the most basic safe supermarket spirit is suitable. A funnel will help enormously with getting the sugar in to the bottles; use a paper cone if someone has run off with yours.

Having either set about the berries with a fork or open-frozen them to burst the cells, post 40cl or 8oz of berries in to the empty bottle, pour over 35cl of gin and top up with sugar, then replace the caps carefully to be quite sure they don't dribble. Visit the bottles every few days to give them a shake and help the sugar dissolve. They'll be ready for the New Year party or can be laid down for a year. 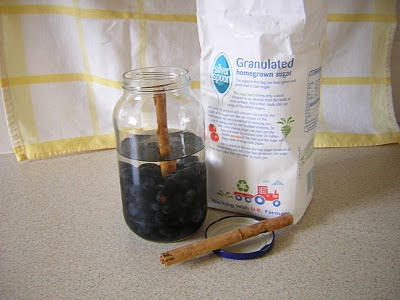 As I had a pair of 75cl jars I made a thicker syrup and buried a cinnamon stick in. This will be suitable as base for other recipes where a fruity spiced syrup is required e.g. punches, pudding sauces, or to sweeten oil and vinegar dressings. The proportions here are 40cl berries, 35cl gin, one cinnamon stick and a great deal of sugar to fill up the space. Some people like other flavourings such as cloves.

The berries should steep until the New Year, but they can be tested at Christmas. It is best used, in my opinion, as a spritzer base as the berries and the sugar are a sure recipe for a terrible headache if drunk to excess. Sloe gin can be laid down for a year and many authorities think it should be, while others think the best thing to do is ignore the sloes and use damsons or make blackberry vodka instead. Maximum keeping time is 3 years.

Approximate proportions:
A shade more than half the volume of the bottle should be filled with berries, then covered by a more precise half-bottle of gin. The amount of sugar is determined by the displaced space between the berries and is roughly one-third of the total volume.

For anyone who has not handled the berries before: do not attempt to eat them as they have a gravelly stone. No matter what you might have heard they are not suitable for eating. Yes, I have done the experiments. If the gin comes out very thick, sieve it through a tea-strainer. If it comes out fairly thin, consider running it through a coffee filter paper to clarify it. The sugar may look like a lot, but it is the sugar which draws out the sloe flavouring in to the gin.

This preparation uses very little time beyond the collecting of the berries, and that counts as exercise. It produces sloe gin at roughly two-thirds the cost of a commerical bottle.
Posted by Woman on a Raft at 12:00 pm

It is not a suitable job for children

We used to pick these as a family day out in the countryside when I was very young and my brother even younger.

After the making of the gin and the subsequent storage of our labours, the two of us used to regularly siphon it off in the garage during the year.

Christmas of course, would find the inevitable cuff around the ear and dismissal to rooms when our crime was discovered.

You must have either been dextrous children and should have taken up pick-pocketing, or you were just incapable of feeing pain.

I have delicate little paws but even so I got a nasty stab and a frosting of scratches.

Given the cheerful acceptance of the clout as a fair risk for the reward, I'm assuming that you were in the stout ruffian department; perfectly capable of chucking a plank in to a horse chestnut tree and taking the concussion from the falling beam and bruises all over when the conkers stung you, as an occupational hazard of the conker season.

Our part of the Lake District is noted for damsons, so we normally make damson gin each year.

There is something very nice about a shot of sloe or damson gin when you're out shooting on a cold day - especially if you've made it yourself.

What a good idea. I shall fill a little hip-flask.

Sloe gin used to be the stuff you HAD to make yourself, or buy at farmer's markets or speciality shops, because it simply wasn't commercially available.

Now, I see Gordon's has started a version, and it can be found in most supermarkets.

Commercially, the interesting thing about sloe gin and related products (such as Bailey's Irish Cream) is that they attract lower duty because they have a lower alcohol content but on the shelf they are perceived as being equivalent to a spirit and charged accordingly. No accident about that, of course.

That means the retailer can charge around £3 more per bottle of sloe gin but less is collected in duty.

However, the quantities of sloe gin sold must tiny compared to the ordinary gin - so far that is. The product is being re-positioned as both a winter treat and also a base for summer cocktails.

The evil genius which is Diageo owns Pimms, Gordons and Baileys Irish Cream. It appears to have gone on special shopping trips in 2006 when brand managers decided to repeat the resurrection strategies which they had successfully used on the Scottish malts brands in the late 1980s and 90s. I wouldn't have thought these would be major markets but they could be nice little earners.

Unfortunately for Diageo, Vince Cable is currently helping them in China so they'll be lucky if they don't end up being broken for spare parts and sold in a market down in Noo Orleans.

The conclusion is clear; buy a commerical and safe grain spirit for macerating purposes but keep all the added value for yourself. Also get the pious green glow of having re-cycled bottles, prevented all those poor little sloes going to waste, and used hardly any road-miles doing it.

Make your own sloe gin and Save the Polar Bears.

What can you make with that stuff for a miserable teetotaler,surely you can make some concoction out of those berries,sy to make me more handsome,stop me picking my nose,keep colds at bay.

Ps what happened to Swiss Bob?

I think Mr Swiss is on a mission to save the world's banking system from collapse. He's doing pretty well as we are all still here.

For colds you want:

Ground cloves, ground cinnamon, ground ginger and (if you can stand it) cayenne pepper.

You can use them as a combined powder but they can be gritty, or steep them in boiling water and filter the spent powder out with a coffee paper. The resulting fluid can be mixed with lemon or orange juice, but I'm also trying cranberry.

The drink raises the temperature and promotes sweating, making life more difficult for viruses. However, cranberry may not be suitable if taking any blood-thinning drugs as there is a standard warning that it can interact with them.

Sloes are no good for anything other than gin flavouring but damsons can be juiced and pureed (take out the stones), then used for smoothies.

Enthusiasts for rosehip syrup swear by it and there is no shortage of rosehips this year. Here's a recipe for it from Jeremy Taylor. He makes rather a lot; I see no reason why it can't be processed in smaller batches.

How about making spiced rosehip syrup and then using this to flavour a sharp bramley apple juice? That's got to be the elixir of youth.

"..the most basic safe supermarket spirit..."

What kind of "unsafe" spirit could you possibly imagine we might have lying around? I've really no idea...

And whoever mentioned Damson Gin - YES! Wonderful stuff, and the most beautiful colour you could wish for. Like Sloe gin, it does not taste of Gin at all.

Beautiful flowers, lovely berries and superb walking sticks and shelaleghs - all from the Blackthorn.

Indeed, Killemall, considering the seeds are free and plentiful, germinate easily and the plant grows obligingly fast, I can't understand why people are putting in that pushy and vulgar pyracantha for security hedges.

I'm going to put some in a pot and see if they catch next spring. A mixed hedge of apple, blackthorn and rose would be beautiful. Not sure where I can hide it; I haven't got a garden on that scale.

Not only walking sticks and shillelaghs - I have my father's blackthorn swagger stick - as used by officers of the Tank Regiments.

I am particularly partial to Blueberries. Would they make as suitable alternative to Sloes?

JT,
Haven't tried blueberry gin but I would imagine the relatively delicate flavour of the blueberry would be somewhat swamped by the strong taste of the gin. As a fellow blueberry fan I suggest blueberry vodka instead - and having just thought it up, will pick up a bottle of Asda's finest on the way home from work tonight and give it a whirl.

I don't know about blueberries, but the man in the park who was walking his dog agrees with Submariner, JT.

He said that he was successful with blackberry vodka, which, of course, are collected a few weeks earlier than sloes. Just strain the pips out when serving.

This recipe is from Gunther Anderson, who believes that the key is to freeze the blueberries first. The other difference seems to be that blueberry vodka is made by adding the sugar later, after the berries have been steeping for about three months, and then let them rest again.

Times given to create blueberry vodka vary wildly from 2 weeks to 6 months.