1) The climate is going to collapse if I drive over to see my mum, so I'd better stay indoors and eat turnips for the rest of my life, except when going out to pay tax.

2) Terrorism. We'd better not say by whom, or how this particular source is a competitor ideology got up in the garments of a religion. Even though it has been documented for the last thirty years at least.

3) Banking Crisis. There's no money and there won't be for at least the next 150 years. That's not a threat - it has already happened.

4) Health scares. Did you know fat is contagious?

So pfft to any measly threat of invasion. Don't I realize that eco-famine, unpredictable violence and the Dreaded Lurgi, plus the country being flat-broke, are going to get me long before the police can suicide me for being insufficiently obsequious or out after curfew without offering them a blow-job? 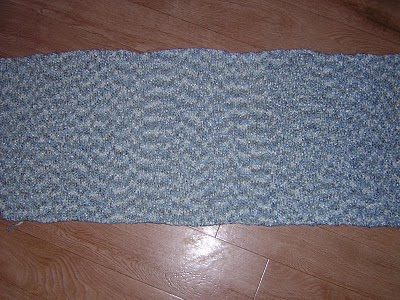 I was going to suggest knitting something for comfort, but having looked at my last attempt, another suggestion might be better.

However, a freezing river fog has descended and if anybody thinks I'm mucking about trying to light twigs in air as wet as a haddock's handbag, they are very much mistaken. Soup will be indoors and a level of abstraction will be used to liken ordinary pans to ritual vessels.

Vegetable soup is the simplest, according to what you have laying around. I happened to have a butternut squash, four small onions and a lonely cooking apple.

The easiest way is to roast everything before it goes in the soup as this intensifies the flavour. Cut the squash in half, scoop out the seeds, then lay it flat-side down in a little oil on a roasting tray. Surround with roughly-chopped onions. Roast for about 15 minutes on a high heat; remove the onions to the soup cauldron before they frazzle. Check how cooked the squash is. The chances are it will need another ten minutes, turned over on to its round side. Add the peeled apple slices at his point. Apple roasts very quickly.

When the squash and the apple are done, scoop out the soft flesh and add them to the onions, along with any oil which might be hanging around in the roasting pan. To turn them in to soup all that is needed is water, seasonings and spices to your satisfaction. You might want to add vegetable stock, depending on your tastes. (I like it).

Now, as squash can be fibrous it is preferable to liquidize the soup with a stick blender. This matters less with starchy vegetables such as carrots and potatoes which will settle for being mashed. If you use a stick blender it is important to add cold water to the veg because hot soup .... well, I'm sure some clever-clogs already worked out how hot liquid affects plastic-sleeve blenders.

You now also have a pile of squash seeds. You can have a go at planting them next spring or roast them as a snack. Wash them and pat them dry, turn them in oil and roast on a high heat for 15 minutes until about half have popped. They aren't too bad, but I can't see them challenging other snack foods. Too husky. 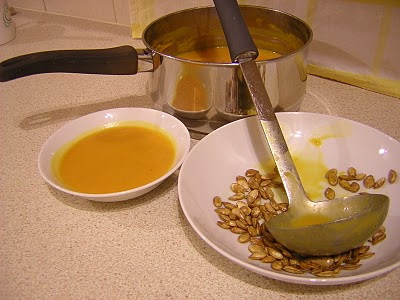 The purpose of the soup ritual is to provide a breathing space against the onslaught of the times. Perhaps it is an illusion, but often it seems that something, or somebody, is trying to scare us out of our wits in order to gain our acquiescence to any number of repressive measures.
Posted by Woman on a Raft at 3:25 pm

An excellent post for a cold November evening. Nearly as good as soup. Thank you.

Great post ... until you mixed it in with the soup !

Agree, EK, but you've got to tread carefully around these subjects, there're folk getting arrested for making jokes or holding an opinion at all.

I'm not disputing there are some real risks; I'm just trying to sort them in to categories from 'realistic' to 'fantastical'.

I am not a squash soup person myself (it always seems slimy to me) but I frequently enjoy a home made pea-and-ham or leek-and-potato, especially at this ime of year.

Was the blender *very* distressed? If so, you need a better blender. Hot soup isn't going signficantly over 100 degrees C unless you have a bizarre recipe with a load of sugar in it, or something else which materially raises the boiling point. And any respectable blender can cope with that.

Of course, if you leave the blender standing on the soup while it's on the gas, you will be conducting heat direct from the bottom of the pan, which is a different matter.

I like soup but butternut ugh,if you have done nothing wrong you have nothing to fear so we are told,so why did you need two rather hi bright lights to take your piccy,if you listen to the turnip heads on climate change how will our taxes help climate change, all I can think of is putting all the money orbit between us and the sun,and use as a sun shade,terrorism ,they forgot Germany WWI,Hitler,IRA,all scarey but people still lived and died,the only bother now is letting a load of nutters into our area's and find the their instruction manual is still ver 1.0 and is 1400 years old and still is set up to quell the tribes.
Banking crises what crises, set up to make the banks and shareholders and politician's via backhander's more money.
Health scare another money maker,set to scare you to death by the doctors trade union,surely they have no bias or shares in health foods.
If the wooly thing keeps you warm in this climate change then it works

I shall cherish that analogy, WoR.

I hadn't even noticed the hi-lights until you pointed them out, Albert. They are just the ordinary lights so they are part of my reality.

Which just goes to show that if you become habituated to something, it doesn't just stop bothering you, it becomes invisible.

Fab post Woar. May I suggest that you don't listen to the BBC whilst knitting? Plays havoc with the tension. x

What Albert says. The good thing about getting old is that things get progressively less scary as you go on.

There's nothing like home-made soup - leek and potato (made with milk instead of stock - it doesn't freeze but has a richer, creamier taste as a result) is just perfect for winter, with hot, fresh crusty bread...

I've looked at that knitting.

If you squint, stare at it for five minutes, then slowly push the monitor away from you, a beautiful white unicorn emerges from the mess.

MMMMmmmm....hot veggy soup and crusty bread - lervely. One would suspect bally healthy too. My kitchen has had a bit of a jihad incident recently involving teaching myself plumbing but a brilliant idea to muse over.

All very interesting, but I rather think our gracious host is merely trying to warn us (as if we did not already know) that we are in the soup up to our necks.

Very true, Soupcon, but at such tiemns I find a warming soup is one of the few consolations available. I agree with JuliaM about the milk trick: that's what I do too with Leek & Potato. I also throw in a little garlic and some finely-chopped sizzled bits of bacon. Yum.

14 comments and NO ONE has said it yet??? Damn you people, you have forced me to do this:

If you had written more about kitting I would have got 'yarn' in there somewhere too, but it's monday so I will go easy on you.

Enjoying the blog by the way, cheers.

Mrs Raft, you have stumbled on the meaning of life, chez Scrobs!

Squash is great in soups, so much so that the new allotment will get a whole 20 sf area next year, and also add baby pumpkins, which are even nicer!

Mrs S chucks anything in, just as you say, and also uses up all the cream crackers which Jacobs sell with nosh-by dates which clock up within a nanosecond of the hour on the side of the packet and start to rot and fizzle with mould...

Soup's even nicer in hot waether so we've found this year, well, on the three days when it was hot!

Looks like the world is dividing in to those who enjoy the squashes and their magical bulbousness, and those who would need to be close to starvtion before they were prepared to choke then down.

Perhaps it is genetic; round here there is definitely a variant where some of us love tomatoes and rip them off the vine as soon as they blush, whereas others regard the smell as utterly repulsive and right up there with dead lizard, capable of tainting a whole plate if a tomato is put anywhere near it. Even stranger, this does not apply to cooked tomatoes, which do strike them as revolting.

I am a big fan of all forms of tomatoes, but regard pumpkins as somehow sinister and rather suspect.

Did the "what's left in the fridge" version of leek and potato last night: had no bacon so chopped a few bits off the everlasting chorizo, threw in a clove of garlic and used a liquid base of 50:50 milk and water to just cover the cubed spuds and finely sliced leeks. Fabulous.

And a chicken stock cube, which I forgot to mention.

The government loves you and will save you from harm by confiscating your knitting needles to avoid 'stab your eyes out hazard'.