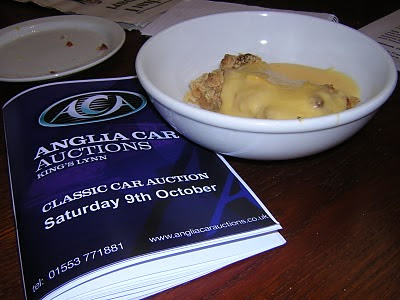 Butties gone, apple crumble and custard next
Drove to King's Lynn for Saturday's Anglia Car Auctions Classic Car event. They don't let you bid unless you've registered at the office, so there's no danger of finding you've accidentally bought a monster whilst scratching your nose. Hundreds of people come for the spectacle or seeking after that dream on wheels they've always wanted to own. Maybe they will find it; such things exist and here is the proof.

This is not the sale where you buy the sensible work-a-day vehicles for hauling paint or animal feed or ladders or grannies; this is not where you buy a wife. This is where you buy a mistress. The crowd is 95% male. The clothes are Clarkson, but proper bloke jeans and leather bomber jackets. As this is an Event, not just a sale, the jeans and shirts are clean.

There are one or two golfing jumpers with plump wives on their arms; in the Mormon fashion these are men come to buy a second wife and they want the approval of the first wife. A fat lot of good it would be to have the missus at odds with the other missus.

It's £4 on the door to get in, for which you get a catalogue and full access to the cars. Unlike a museum where you aren't allowed to touch the display, here you can open everything and even get in if you wipe your shoes.

The gates open at 10am so there is plenty of time to have early lunch in the cafe, although it is a crush before the auction starts. Then have a good look round the offerings, making notes of the lots you are particularly interested in. Everybody looks very serious; as thoughtful as a farmer leaning on a fence and figuring the price of cattle at a county show.

The fascinating - it means hopelessly expensive and will take all your time - projects are the ones which have been discovered hidden in the back of barns or old buildings. One day a 1954 Sunbeam Talbot 90 Drophead Coupe was parked in a dry but very dusty garage, possibly because it needed some repairs. 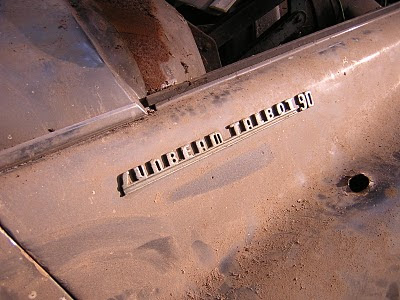 Going by the condition of the cars which have been found after twenty years in store, this one might have been parked around 1970 after 16 years on the road. This is not just a car sale; this is industrial archaeology. (For a full picture, see the first link. The car is the first item on the catalogue).

Eventually it is time for the sale proper, so everyone makes their way to the great sheds where the cars will be driven through - it's generally a bad sign if they can't even make that short journey - and either dealt of held in front on the auctioneers dais.

There is a sign on the door showing we are in Kansas: 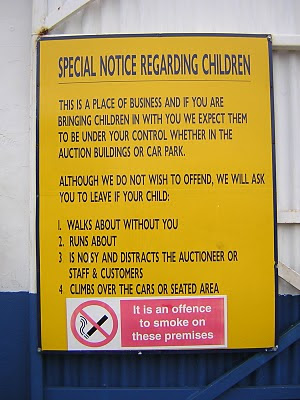 There is a tang of religion in the air which is full of the incense of hydrocarbons. The auctioneer leads the ceremony from his pulpit and everyone has their catalogue out, marking the price or bids for the cars they would have liked for themselves. A few cars are withdrawn either because they fail at the door or because they never make the reserve price at the block.

Then auctioneer treats them all the same with his manic chant, the glory of which is to make it sound like he is running on a wheel when everyone can see that he's just a man standing with a microphone. From the floor and at his elbow there are phone bids coming in from people who are giving instructions from home.

The car of the show was the surprise star; lot 96, a 1974 Citroen Pallas mechanically sound and exceptionally restored by a body shop specialist. Delta blue with a black leather interior. 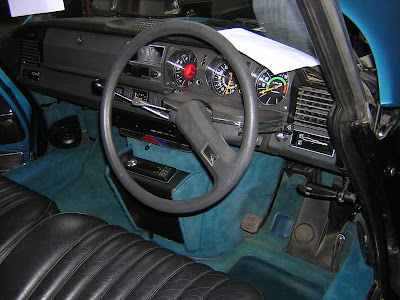 The detailing of the original design shows that when the French think about Futurism they are touched by genius. The white stripe down the side, for example, is not merely a visual motif. It is a ridged rubber scuff-strip which fits in to chrome holders and can be renewed to protect the car. 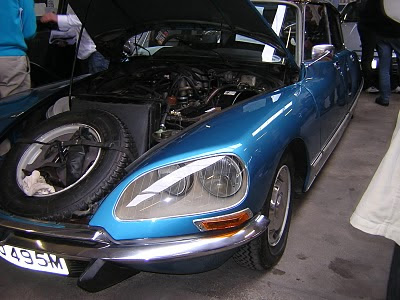 This car looks like a space ship and is as fresh as the day it came off the drawing board. In the end there was only one bidder for it, who got it at the reserve price of £20,000.
Posted by Woman on a Raft at 4:27 pm

I had just got my itch for a classic British bike under control and you go and show me this. Proper cars for sensible money. I'll tell the bank manager it's your fault.

Tell him/her you value their opinion on collectable vehicles as an asset class, Richard, and offer to cover the cost of petrol and lunch (Guinness & Beef casserole £7, gateau £2) so entry and refreshments should come in under £30 and then petrol from where ever you start from.

It can be safely declared by the manager and cannot possibly be construed as bribery; it is a day out researching a specialist market.

I was surprised that lot 31, an exhuberant 1979 Capri in fire-engine red only made a provisional £2,100 and I don't know if the seller accepted that.

In general, the hammer was falling at the bottom end of the catalogue estimates with only one or two going over the top of the range, usually when the car had a place in the public affection such as being 'the sort Bergerac drove'.

If I were buying a signature car for a Sunday teatime period drama, this is where I'd hunt for it.

I did not need to know that, Dammit.

If I had three grand in the bank, I could so easily blow it on something like that Austin A35. There was a time when cars were charming. Not today; they are either 'aggressive' or cute, and therefore hard to love, but you couldn't not love the baby Austin.

I love 'em, but I'm hopeless at auctions, and always have to buy something - anything. Lady Killem usually ends up dumping my purchases in a skip.

Why do I buy crap? I have no idea. I once bought six dozen pint glasses at an auction - it just seemed like a good idea at the time. I will never, ever reveal how much I paid for them.

Charity auctions are the worst. I buy crap at vastly inflated prices. The latest purchase, last Saturday, was two whiskey glasses for £25. Should make a good Christmas present for someone or other. They'll probably just chuck 'em in a skip, in any case - but Macmillan Cancer Support will never know that!

I'm not only a sucker for crap glassware. I've still got a two-stroke rotavator that I bought for an embarrassing sum of money at an auction in the '80s. It didn't run then, and it doesn't run now. I'm just surprised that it's still in the barn, and hasn't been skipped.

The only way I would survive at the car auction would be if I were in a straitjacket. At least that way I would maintain a modicum of dignity, and not tramp home to be vilified once again by the lovely Lady Killem!!

Glad you enjoyed it, Killemall.

Would it help you to know you aren't the only person with a Rotavator which doesn't?

Mike in Cambridgshire has a whimsically named Wolseley Merry Tiller, which is neither merry nor tilling.

However, Mike is an optimist and has bunged it on ebay where it appears to have a bid for £52 on it.

But what turns the heads of the shop workers and the fairground workers in the port area, who are used to seeing all manner of supercars everyday? Which cars encourage the waiters to nudge each other and nod their colleague in the car's direction on the never still, traffic blocked, boulevard?

and recently fully restored Mini Coopers are the IN car.

Woman on a Raft: You are now on my blog roll. Welcome!

Bill Quango: I am a member of the Automobile Club of Monaco.

I've taken my Morgan Aero 8 down there many times for the Grand Prix and have always been let into Casino Square and the tunnel by the local Gendarmes, who take great pleasure in turning away the Ferrari and Porsche owners.

Make of that what you will..

What a lovely car.

Thanks for linking me. I'm sure my blog will be back up and running once the dust has settled in my private life.

If has four wheels and it's street legal who care's,you will still get stuck behind a caravan or a nutter,especially women doing 20 mph on any road in the land,me a car is a piece of kit that takes you from A to B,if it doesn't I would hope it had AA or RAC membership,now steam engines or stationary oil engines,drool,slurp mmmmmm.

Albert, you should have been with me! I had a great time on low carbon day.

Richard been there done that,used to go to a show just outside Cardigan every year, was at the Corwen show in August ,I love Cardiganshire and Pembrokeshire it's an area I want to retire to,you can have Cornwall or EK's county they have nothing on West South Wales.

My Dad used to have a 1961 DS19 Safari and I'm glad to see that the mushroom brake pedal was carried on with the newer models!