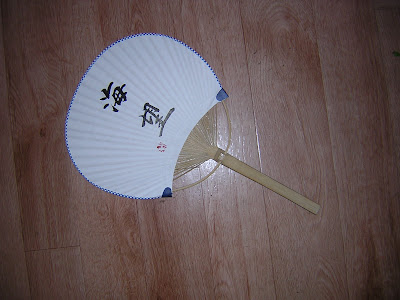 To Brick Lane for the HyperJapan event held in a 1950s warehouse which used to be part of the old Truman brewery.

The show had the patchwork atmosphere which comes from a mix of small businesses rather than the aggressive displays of the global companies. However some of the companies are global brands in birth as they take orders via their websites, manufacture the goods in China, then do the accountancy and marketing from Japan. A few big players such as Panasonic displaying their giant 3D tv systems, came to join the fun. Considering the aim of the show was to sell high-priced goods to Brits, a surprising number of Japanese people came along for a taste of pop culture, just like home.

The glass roof of the old store floor in F block T1 provided the Blade Runnner atmosphere of a re-colonized beer factory. In its painted brick walls it keeps the post-industrial melancholy which modern London has swept away in the past twenty years. Wiping its tears away with an exquistely embroidered silk hanky it charges you a fiver to even look at the shop. The show popped up inside the reclaimed space with its imperfect roof, a cheerful magpie's nest of karaoke, fantasy and riffing on traditional themes, such as making a fortune.

The West lauds Japan for its simplicity and purity of vision; this was nothing like that. This was heretical and steam-punky, growing out of the eclectic tastes of Japanese youth; the ambassadors of cute and the otaku (nerd) subculture. The girls dress like porcelain dolls, the boys hang around glumly and pay too much attention to the pneumatic fantasy heroines in the model kits. Much like youths anywhere, really.

The food court had about half a dozen mobile kitchens where the sushi chefs were working themselves to a sliver for three days running. These were surrounded by grocers selling Japanese brands of store cupboard goods and one or two ceramics shops. There was a distinct lack of obesity. Live on rice, fish, and chicken and you won't pack it on the way wheat, dairy and beef-eaters do.

The stall doing the most business had manga cartoonists turning out portraits within minutes; they were queueing down the hall for that. The Kimono ladies dressed customers and took their photos, as did the man who makes Japanese armour for martial arts and display.

The lady applying eyelash extensions by hand was building a portfolio of regular customers; three days hard work but she should have enough repeat work to keep her busy until Christmas. The wigs and hair pieces were being carted off by the pelt-load in their distinctive Loves Change carrier bags.

The stage ran events with music the audience likes, such as James Bond themes and snippets of opera.

There was a roving live-feed to the equivalent of Japanese Youtube. Wranglers lined up visitors to be interviewed in front of a huge digital screen. Comments from the watchers on the other side of the world drifted across the live image. Hi, very cute, you like udon, you look like man.

It is regarded as rude to take a photograph without permission so taking them requires "May I?" then reciprocal posings and bobbings. Everyone has the idea that the Japanese bow a lot, so they get the custom in first. The Japanese look vaguely baffled, bob back and put a penny in a tin for the knee replacements they are going to need if this keeps up.

The specialized fashion labels shifted more products than even they expected; by the end there were barely a handful of dresses and one or two over-priced handbags left. The inspiration is high Victorian. These are maximalists, harking back to the opulent eye which has its deep-memory in Catholicism. They use a cocktail of words; 'Elegant Gothic Aristocrat Vampire Romance'. I never yet met a Vampire who was not aristocracy. The prices are enough to make you faint but they know what their customers like and it is a level of detail and whimsy which the constipated miserabilists if western fashion cannot understand; the most they can tolerate is the little doggie on a Radley handbag.

Then, on an aisle corner, a picture nothing like anything else in the hall. The calligrapher Koichi Murai of Kanji designs has one, just one, landscape. 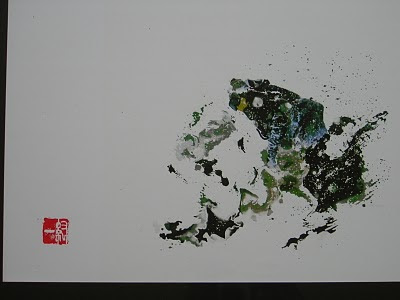 Koichi Murai - "Powder" - ink on paper - calligrapher's stamp.
Sapporo-born Mr Murai expresses the energy of skiing down a mountain in Hokkaido.
Posted by Woman on a Raft at 2:00 pm

"It is regarded as rude to take a photograph without permission so taking them requires "May I?" then reciprocal posings and bobbings. Everyone has the idea that the Japanese bow a lot, so they get the custom in first. The Japanese look vaguely baffled, bob back and put a penny in a tin for the knee replacements they are going to need if this keeps up."

Japanese culture is, I think, the closest we in the west are ever going to get (short of that UFO landing on the White House lawn) to a truly alien culture...

Except that I'm not too sure the UFO didn't already land on the White House lawn....