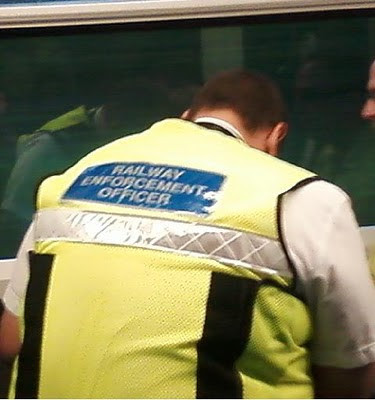 Not the PCSOs this time, but the Rail Enforcement Officers (REOs) who have responsibility for helping railways stay safe and not have their services nicked by people dodging fares.

They have a legitimate job to do and they have some limited delegated powers. However the source of these powers is mystical and doesn't look as well-founded in law as the REOs would have us believe. I'll take it that I can contact British Transport Police and find a piece of legislation which definitely gives the REOs the legal authority they claim (you never can tell these days, people often make it up as they go along), but I'm also assuming that an REO doing their job properly is doing something which we would all think is right.

A company has the right to exclude free-riders, to collect the monies due to it, to not have its trains and the stations it operates smashed up, and not to be blown to smithereens by some of the customers. It has the right to appoint employees, or third party contractors, to do this safeguarding job on its behalf. Realistically, detecting terrorism is still going to be the job of the security services because the modern terrorist is indistinguishable from everyone else. Even the professionals get it disastrously wrong. About the most an REO can do is note when anything is left laying about or vehicles parked in an unauthorized fashion, and isolate it quickly.

Back to the REOs, then, who gave Olly Cromwell some bother on Friday night. Olly recounts the delay and a number of things said to him.

Olly was taking pictures of the imaginary police officers - specifically the backs of their jackets - who have been dressed in such a way as to deceive the unwary in to thinking they are real police officers. It is possible to dress an REO in a uniform which looks smart, is practical, and identifies them as an employee of the company. Banks do it. Lorry companies do it. Supermarkets do it. This reminds the employee who they work for and what job they do, even if they are third-party contractors. Unfortunately, with the way the police dress now, it is also very easy to make non-police staff look like police officers. All it takes is a hi-viz vest and a couple of belt pouches.

At first this seems like a good idea, making the REOs effective by piggy-backing on people's reluctance to cross the police. However, there is a downside. The employees may stop identifying with the needs of the company and the primacy of customer service and how it supports share price and profitability, and begin to identify with "the lads", developing a rich and paranoid fantasy life which the police do not share. Or not with them, at any rate.

The next thing you know, they are threatening to have people arrested and demanding to look through items which are none of their business. That isn't always legal when the police do it. It is outrageous when a person who is merely another citizen takes it in to their head to rifle through somebody else's purse/wallet.

In response to Olly's email of complaint about being wrongfully detained by the REOs even though he was perfectly willing to take them to a police station at the terminus to have the limit of their authority explained, SouthEastern's Lisa McGrath sent a standard letter which was polite but confused the legal situation with the voluntary protocol which rail enthusiasts use.

The legal situation could be very serious for the men involved; they may be personally liable for false imprisonment if Gary Slapper's outline is correct. The threat of arrest would be enough to constitute intimidation and it might not be a defence to say that the employees felt threatened by knowing someone had taken their picture. We are all having our pictures taken all the time these days and have not the faintest idea who, if anyone, is eventually going to see those images.

When an REO approaches a customer they do so without a vital piece of information. Who are they challenging, apart from not knowing their name? Looks are deceptive; can you tell just by looking who is a sector analyst? She might be very pleased to find an REO is doing their job courteously and conscientiously, protecting the company's revenues. However, imply that she's a slag who sleeps with the fourteen other blokes registered to her address, or act like a stalker by examining documents which are not within the REOs authority, and somewhere there will be a manager who would like to talk to you before you wreck their bonus.

Do it enough times that people start comparing notes on websites, and eventually it could be reflected in a drop in share value. As Olly pointed out, he only noticed the REOs because there have been reports of them regularly exceeding their authority.

Following today's invitation to Olly to kill himself from someone with access to Go-Ahead's intranet, the market may wish to take a view of how seriously Go-Ahead take paying customers and how poor the management's grasp on its employees must be that it was sent. I suppose we should be grateful they specified hanging rather than jumping in front of a train.

Thus, a distant third-party employee can damage the interests of executives, other employees and shareholders, so managers must make sure that front-line staff and contractors do their job politely, within the law and don't go off on a frolick of their own. The first step in that is to remove the quasi-police uniforms and make them wear something distinctive which matches the livery of the train operators.

The Chief Executive of Go-Ahead is Keith Ludeman and the Group Communications Director is Samantha Hodder, 020 7821 3928 email samantha.hodder@go-ahead.com. Ludeman is the person ultimately answerable to the board if he has hired subordinates who annoy the customers and make the company look bad.
Posted by Woman on a Raft at 8:52 pm

Thanks WOAR & Olly, I've learnt a lot from those two posts.

Yes it would, Banned. Good point. The word smuggles in a concept. I hadn't spotted it.

That isn't always legal when the police do it. It is outrageous when a person who is merely another citizen

Sorry to disrupt a beutiful paranoid moment for you, but a POLICE OFFICER is ALSO "merely another citizen".

In fact "A citizen locally appointed....."

I believe Mrs Raft is pointing out that the police in the UK have powers available to them which are not available to the citizenry at large. Are you asserting that she is wrong?

If so, would you mind explaining the legal basis for your assertion?

If not, please elaborate on the point you are trying to make as it must have eluded me.

"Following today's invitation to Olly to kill himself from someone with access to Go-Ahead's intranet..."

What on earth possesses people to double-down on the stupidity in these sort of cases?

Treble-down if you include using Adrian Chile's name, which is what triggered Olly to look up the IP in the first place.

If it had been the usual anon it might not even have occured to him that it was from inside Go-Ahead.