Inland to Toppings Bookshop in Ely for the book launch of Michel Roux's latest work, Desserts.

A gust of oestrogen knocked me over as I walked in to the hall they were using for the event. You can keep your interfering hyper-active bully-boys with their pukka pasta. If you want to see a babe-magnet in operation and grown women going giggly - and I'm talking about from 18 year olds to 80 year olds - Michel is your exemplar.

He doesn't appear immediately as there is a lunch first. Substantial quiches, salads, wine or elderflower presse are balanced on knees while people pre-buy books and browse through a selection of his other titles. Roux has a regular editorial team, including his wife who does the proof reading, and they are all credited. He produces books with the same values with which he cooks - just as he wouldn't ask someone to eat food he wouldn't eat himself, so the book has to satisfy him as an object, as a work in its own right. Later he emphasizes that he knows every page number for every recipe - it's his book, his name is on the cover.

Eventually Mr Topping - who has been toting boxes for days now and is nearly melting in the lunchtime sunshine - stands up and begins to tell of his joy at hearing someone say the bookshop was 'just like the one in Notting Hill'. Ha! That means he is equivalent to Hugh Grant. However, the bookshop in Notting Hill has just closed, as have dozens of others.

Toppings in Bath and Ely has bucked that trend by adding value as a retailer. They hold a book club each month and well-organized events where the authors are expected to turn up and perform. They also offer you fresh tea or coffee - for free - and don't mind browsers, so it's rare that you get out of there without something you didn't know you wanted. The lunch is to develop a trading relationship with the customers, so for £15 you get lunch, a literary cabaret, and a signed copy of the book.

Then comes the treat. The ladies come in with trays of desserts made by Michel's very own hand. On each white plate is a slice of chocolate raspberry roulade (roule marquis, page 168) and a shot-glass sized fig and honey pannacotta (page 76). There is cat-like purr of five dozen women simultaneously licking vanilla ambrosia and forgetting there is a world outside. 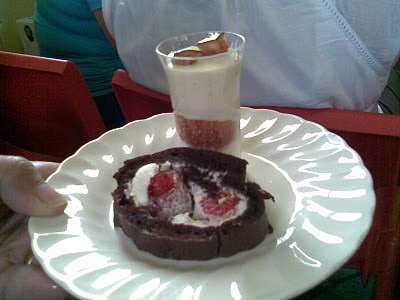 The audience is now as pliable as a sheet of soaked gelatin and the star comes out of his kitchen to great applause.

Time has been kind to Michel Roux. It's been more than kind; he is a Frenchman with a big nose and he's 70 so it isn't fair that he looks better now than he did twenty four years ago when he and his older brother Albert bickered their way across the nation's TV screens to challenge the worthy approaches of the kitchen divas such as Delia Smith. Michel remains slim and obviously active, no stoop, tanned, with white teeth and blue eyes. Even his hair has swept itself back in to a chic silver bardic mane which he certainly didn't have in 1988. I have the picture here - in those days he had to make do with an ordinary mousey fuzz of a barnett.

Being French he feels there is an obligation to show Italian men how It Is Done. There has to be a quality of casual effortless grace which leaves the Italians looking over-polished and fussy. "'Ow to understand a woman?" he shrugs Gallically, and the Italians would seethe because they know he does. The Brits nod sagely, interpreting it as a shared take-my-wife joke. There, right there, you have Europe on a plate.

There are barely a handful of men at the launch, which is strange when you consider how Roux's work is either neutral or masculine, grounded in the professional kitchen and the concepts of aristocratic food, not peasant pottage. It can't only be women who manage to get away from the office or the home at lunchtime.

Michel opens with a cautionary tale. He had hoped to show the signature fruit meringues he is proud of but they turn out to be very sensitive to air humidity and the quality of the oven. He waves one, explaining how disappointed he was with the texture and uneven quality. The encouraging moral is: even Michel Roux has disasters. None the less, he urges us to give plum meringue, page 150, a whirl. "Plums are cheap, you must dry them well, meringues are cheap if you have just made something with egg yokes".

Considering his name is linked with expensive food and he's obviously not short of a bob or two being domiciled now in Switzerland, it is surprising how many times he refers to the cost of food. It is preying on his mind - but then, being born in 1941 and growing up in the austerity years after the war with an unreliable father, he must have experienced what it means to be worried about food and its price. Perhaps that's why he cares so much about every mouthful; the ghost haunting him is not bad food, but no food.

He advises not starting with the book, but to go to a market, find what's cheap, then go back and look up a way to cook it. There's nothing special about that advice but it cuts through the marketing nonsense about wandering round a supermarket with the recipe their celebrity chef has suggested which just so happens to require five of their premium pre-packed ingredients.

The advice goes on. An omelette takes between 1 minute and 90 seconds. He advises scrambled eggs with a scoop of cream, Albert says two scoops. If you use milk the eggs will be a little wet but that may be the best way for you, if you don't want to use cream. Do not mix spices in desserts - stick to only one - two if you must - to avoid confusing the flavour. Fresh fish is a live food and very good for you. Meat is already very dead and if you cook it wrong, it can be twice as dead. A Christmas pudding is a wonderful thing and he believes that his own are the best in the world. (Although it doesn't appear to have made it in to this book). Don't use more than about six ingredients in a dish, unless you have a special reason - it is too much, too confusing. A cook must have a glass of wine while working, or at least water if you are not a wine drinker. Despite this being a book about desserts and therefore not without calories, the use of fruit and a reduced quantity of sugar and fat has been recommended . The trend is for lighter desserts, he says.

There is a lively exchange of views about the storage of eggs resulting in Michel being exasperated about too-low storage temperatures and the lack of larders in the modern house due to the EU. It's not clear to me precisely how they are responsible for that but sometimes his French accent is still hard to understand, even after all these years. "I'm in favour of the common market" he said, echoing so many people over the years "but not this EU".

Neither I nor any other lady there cares tuppence about understanding every word - he can read out the phone book as far as we are concerned, and it will still sound like ginger creme brulee (page 75), but it brings an interesting thought about the book. Roux writes in French because he says it is still quicker for him. The translator, Sally Somers, then puts this in to crystal-clear English, but in doing so it is impossible to avoid rinsing out some of the warmth and poetry of his Franglais phrasing.

One day he should write a book with the French on one page and the translation opposite, perhaps a considered guide to shopping and stocking a kitchen without over-spending or wastage, but getting value for money. If that's where good cookery starts, it is time he addressed the subject directly in his own signature grammar.

The cook what's in season advice may be old but it could do with being repeated before every shopping trip.

I like these bookshops. I sometimes visit one in Bath which does something similar. They do need a moderately easy-circumstanced, large and literate catchment area to survive, though, and W11 now only meets two of those criteria.

"The cook what's in season advice may be old but it could do with being repeated before every shopping trip."

First, you'd have to educate the public on the term 'season' and what it actually means...

The marketing industry seems to have monopolized the notion of season for its own purposes.

There must be a way to get it back.